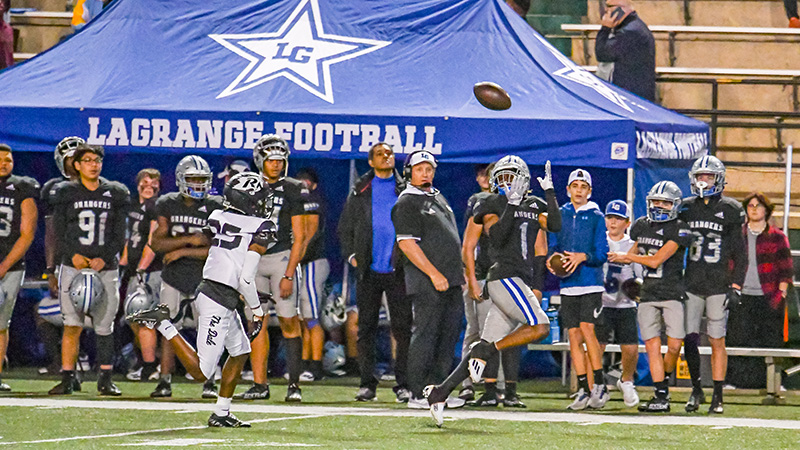 After two consecutive one-score losses versus top-10 teams in AAAA, LaGrange responded with a clinical 28-14 win over Riverdale.

“Our kids could have put their head down and came out flat against Riverdale,” LaGrange coach Matt Napier said. “They are coming off a region championship run in the playoffs. Our kids are banged out after fighting battles for the last three weeks. We’ll need to heal up, but I’m proud of the guys tonight.”

The Raiders took a lead on a third down pass for a touchdown in the first quarter. The Grangers had a response in the form of AJ Tucker, who finished the Grangers ensuing drive off with a touchdown.

Tucker was one of the main reasons as the Grangers got the win. He finished his best game of the season by carrying the ball 14 times for 153 yards and a touchdown.

“He missed a couple of weeks earlier in the season but went to the doctor and got a full bill of health and you could see that tonight,” Napier said. “He was back on his A-game. He brings a physicalness to the game.”

The drive was kickstarted by a 28-yard pass play from Parker Shattuck to the other Grangers running back – Jonathan Keys – on a trick play.

Brown was clinical for the Grangers. The senior quarterback went 7-for-12 for 148 yards and two touchdowns while adding 23 yards and a rushing touchdown on the ground.

Riverdale took the next possession and started driving before a massive tackle by Parker Shattuck and a host of Grangers defenders on a fourth down that gave the Grangers the football back. It was not the first or the last time the Grangers defense would come up big in the game.

“I’m proud of our defensive coaches for putting a great game plan together,” Napier said. “That team has some dynamic players on offense, and we were able to corral them a little bit.”

Magic Johnson reeled in a snazzy 22-yard touchdown pass from Brown and fought off a couple of defenders to reach pay dirt. This was the first of two touchdowns that Brown threw to Johnson, with this one giving the Grangers their first lead of the game.

Late in the second quarter, the Raiders were putting together another quality drive that reached the red zone before the Grangers were able to dislodge the football and get it back for their offense.

The offense turned that into a 69-yard touchdown from Brown to Johnson.

“They have a great connection,” Napier said. “Those guys ride to school everyday. They are out eating together. That’s one of the special things about high school football, the relationship between those guys is special.”

Johnson finished the game with five catches for 118 yards and two touchdowns.

The Grangers took a 21-7 lead into the break. The Raiders were able to make it a one score game when they scored with 5:30 left to play in the third quarter.

The Grangers slammed the door on any comeback attempt. Brown scored on a one-yard touchdown run to give LaGrange its two-score lead back.

While the Grangers were able to hold that score until the final whistle, there were a couple of dicy moments where the Raiders looked like they might have a comeback in them, but the Grangers defense kept making plays.

Denorayon Reid got a massive interception with the Raiders driving down near the redzone.

“He’s a young player that makes big time plays,” Napier said. “He didn’t play last week against Whitewater, and we missed him. He was about 85% and made a couple of big plays.”

Later in the fourth quarter, the Grangers defense got a turnover on downs to all but ice the game. The offense took over as Tucker bullied his way down the field to run out the clock.

LaGrange improved to 4-2 overall and 1-2 in region play. The Grangers will take on North Clayton on Oct. 7 at Callaway Stadium.