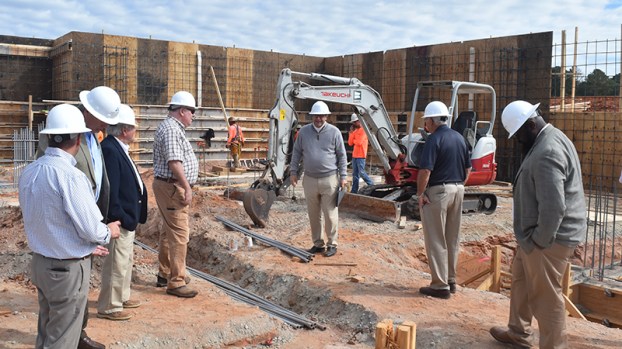 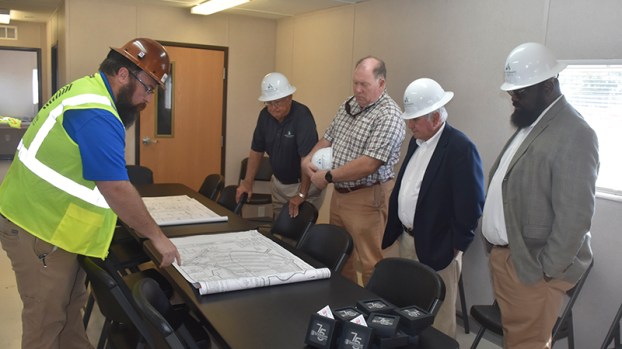 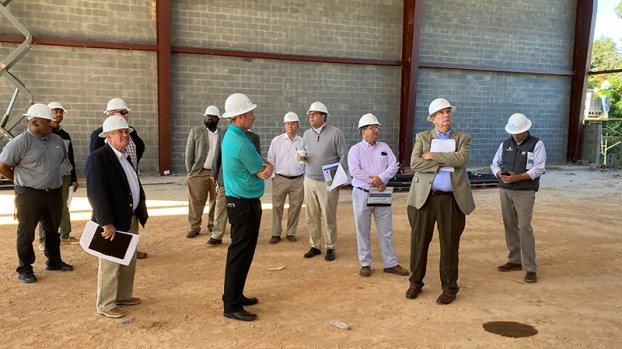 The new large gym needs a lot of work. The roof has been completed, but the gym still isn't enclosed. 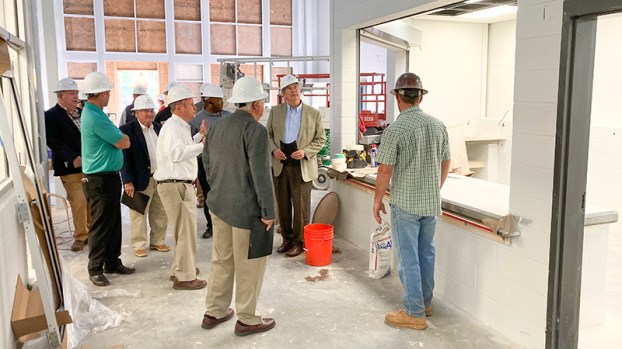 Commissioners check out the new concession stand which will feature roll up doors. The plywood in the background will be replaced with windows. 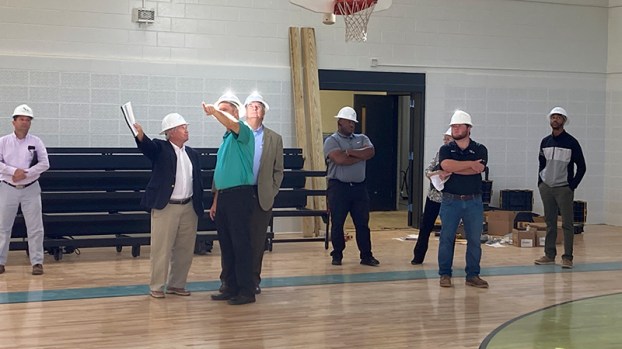 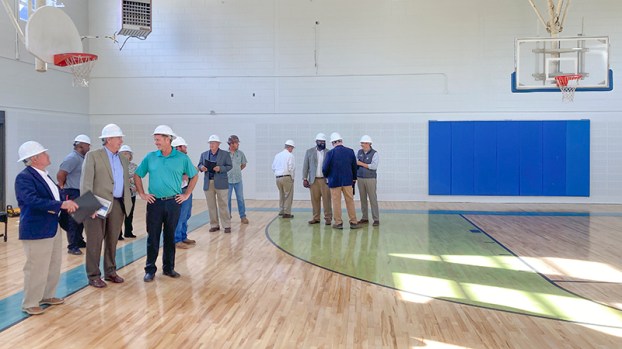 When renovations are complete the William Griggs Recreation Center will have two full-size gymnasiums with spectator seating..

Rick Torrance of Torrance Construction and Architect Skip Smith guided the commissioners through the Griggs Center site to give them an update on the project as work continues.

The work on Phase I of Griggs Center is currently on schedule for an anticipated completion date of April 2023.

Plans for the first phase of the renovations include expanding the parking lot, renovating the current gym and adding a larger full-size gymnasium. A second non-regulation-size practice gym was turned into study areas and a computer lab for public use.

“We converted the practice gym to a health and wellness community center,” Mosley said.

The previous full-size gym is being completely renovated

“This is certainly going to be quite the state-of-the-art facility,” Mosley said. “We will have two competition-level gymnasiums to be able to play in.”

Mosley said the initial plans for the original gym were less extensive. They planned to sand the floor and make a few additions to the existing gym, but they decided on further improvements.

“As we got going, we wanted both gyms to match as best we could,” Mosley said.

Both gyms will have mechanical retractable bleachers and similar color schemes. Mosley said they chose to go with green and blue on the courts to match the county’s new logo and to avoid playing favorites by using the colors of any of the area schools.

“Part of our issue is that we don’t want to show allegiance to Callaway or LaGrange or Troup or Point University or LaGrange College. So, we utilized the county logo as our colors. In the new gym, it will be the opposite with the green and blue reversed,” Mosley said.

Most of the off-street parking has been completed. The 80-vehicle parking lot will move parking off of Glenn Robinson Dr. The county plans to fully eliminate on-street parking at the facility. For high occupancy days, such as when both gyms are being used, visitors can park in an unpaved overflow lot behind the facility.

Much of the interior renovations to the facility have been completed with walls up and windows in place. HVAC systems have also been installed.

The roof for the new, larger gymnasium has been completed, but it still hasn’t been enclosed.

Troup County Parks and Recreation Director Lance Dennis said when the project is completed the facility will be second-to-none in Troup County, even better than the Mike Daniel Recreation Center, at least for basketball. Plans are also in the works to seek funds in the next special-purpose local-option sales tax (SPLOST) to replace the former Griggs Center pool.

While work at the Griggs Center seems to be moving closer to completion, the new Oakfuskee Conservation Center is still in its infancy.

After leaving Griggs, Project Manager Caleb Hutchinson of Sheridan Construction gave the commissioners a tour of the initial work being done on the Oakfuskee project. Smith was also on hand to discuss upcoming plans for the facility.

Much of the grading for the project has been completed and workers have moved on to constructing the lower level of the 17,000-square-foot, multi-use conservation facility.

The county plans to use the facility to host events such as weddings, fishing tournaments, corporate events and more. The center will also have an educational component through Chattahoochee Riverkeeper.

According to Mosley, initial plans for the facility included an area for Chattahoochee Riverkeeper to build out and use. Mosley said last week they received confirmation from the Riverkeeper that they will support the project.

“They’ve gotten support from their donors for up to about $350,000 that they’re going to put forward for the project,” Mosley said.

After the tour, Smith gave the commissioners an overview of design plans for the interior of the event center.

Mosely said the initial plan was for the interior to have a lodge theme, similar to Great Wolf Lodge.

“We felt like that might turn off a lot of people because not everybody wants a country, mountain wedding. They want something more elegant. So, we’ve gone into more of a Lake Resort,” he said.

Hutchinson said they are estimating the project will be completed by October 2023.

“We’re certainly making a lot of headway. The weather has been phenomenal. That’s for sure. It’s been a good time,” Mosley said, describing the work so far.