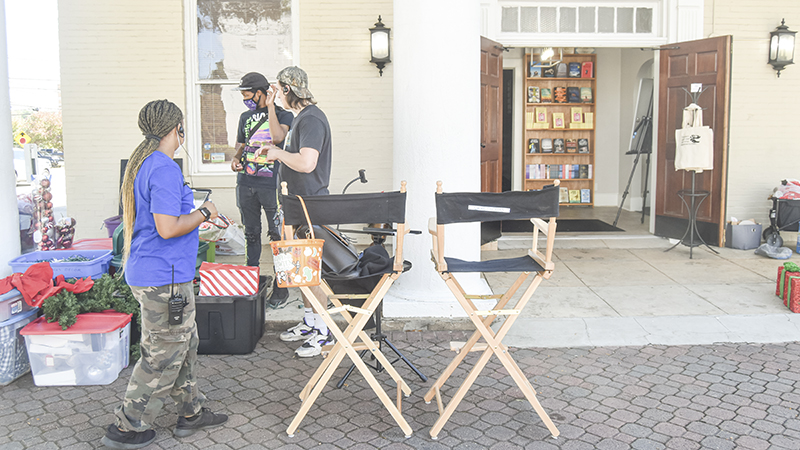 If you haven’t noticed, the Christmas spirit has hit LaGrange a bit early this year.

On Tuesday, local businesses on and around the square were asked to decorate their front windows in preparation for the last day of filming of “A Perfect Christmas Pairing” — an independent film produced by Nicely Entertainment.

The holiday movie is based on a winery setting and uses LaGrange’s very own Nutwood Winery as its central location. The movie is expected to be shown in 26 countries but hasn’t been picked up by a specific network yet.

The film stars Ansley Gordon and Chris Connell. The movie is a made-for-TV film and is expected to have a 2023 release.

The filming was set to officially wrap up on Tuesday evening with shopping scenes of people in the background. Locals were asked to dress like it’s winter, walk along the sidewalks, participate in window shopping, sit on the benches and have fun with friends.

C’sons, Pretty Good Books, Emberglow, Café Brulee and Lafayette Square were also used as filming locations, the filmmakers took the time to get other local businesses involved and put their best face forward.

Chase Hudson, owner of filming locations C’sons and Beacon Brewery, said he felt the movie would be great for LaGrange.

Joshua Rigsby, owner of Pretty Good Books, said that the filming was a lot of fun.

“It’s cool to be a part of something like this. I think that it’s nice for LaGrange and kind of shows off all the cool things about our city — everyone’s been delightful, respectful and a delight to work with.”

Miriam Oropeza-Ramos, owner of Royal Dance-wear, said the local aspects of the movie will be beneficial to LaGrange.

“We need good movies right now,” she said. “It’s important that we appear in the movie and show people that we are real and that we support showing our city off.”

Hannaniah Pinto, owner of Fountain Gifts, said it’s exciting to be in a movie because films play such a big part in life.

“It’s interesting that we can potentially have our storefront on the big screen,” he said. “The exciting part is that people will see that we’re here— we’re happy to be part of that.”

“A Perfect Christmas Pairing” is set to air in December 2023.