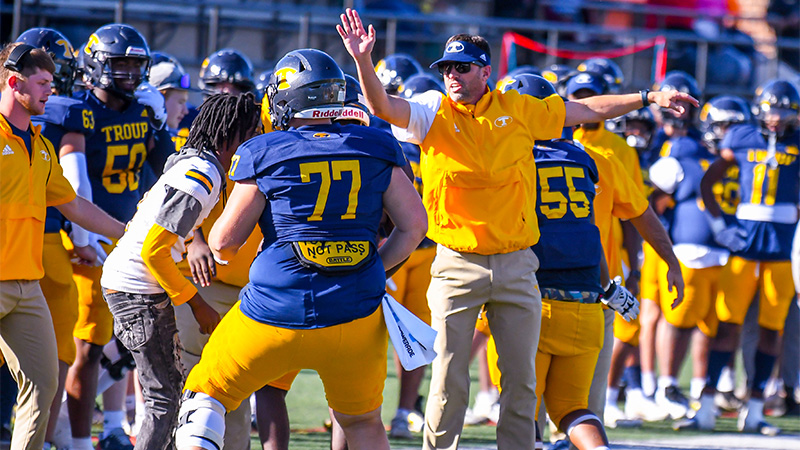 After cruising to a 63-0 win over bottom of the region North Clayton last Thursday, the Troup Tigers are looking to move one step closer to clinching a playoff spot when they travel to take on Riverdale on Friday.

A win on Friday will also see the Tigers inch closer to their first region title since 1987, but the Tigers are focused on Friday’s game.

“They are a good team with some good athletes,” Troup coach Tanner Glisson said. “We saw them in person on Thursday against LaGrange, which was a pretty evenly matched game for the most part. It’s going to be a big challenge for us, going up to their place on a day when we don’t have school.”

School is not in session on Friday, so the Tigers will have to find their rhythm on an off day.

“We are going to try the best that we can to get them in a semi-routine,” Glisson said. “We’ll get here around lunchtime and go through our normal game day rituals and routines.”

Star quarterback Taeo Todd got some rest last Thursday as he only played four possessions of the game, registering two pass attempts including one for a 61-yard touchdown on the first play of the game when he connected with Qua Moss, who was also one of the stars who made a big contribution and then got some rest. Moss also had a 24-yard rushing touchdown in the game as the swiss army knife is a valuable tool for the Tigers on offense and special teams.

On defense, Qua Birdsong was dominant. The junior registered two sacks and a forced fumble and proved to be a big contributor on special teams as he blocked a punt for a safety. The Tigers were able to get Birdsong some rest as well as he only played a handful of possessions before the backups came in.

One of the young guys that took an opportunity and ran with it last Thursday was sophomore running back Cam Cameron who got in on the action and flashed his immense potential, running the ball seven times for 182 yards and two touchdowns

Logan Sinkfield was moved everywhere once again, lining up at running back, wide receiver, cornerback, quarterback and place holder.

The Tigers have been able to stay healthy for the most part this season which continued last week as they escaped with a big win and a clean bill of slate.

“I think it’s three things,” Glisson said. “Luck, our strength and condition staff with J.C Copeland and our sports medicine people like Marty McCann, who gets these guys ready week in and week out.”

Riverdale comes into the game 3-4 overall and 2-2 in region play. A loss for the Raiders will have them all but eliminated from playoff contention. Riverdale will be treating the game like a must win as the Raiders pack their home stadium with hundreds of fans. A loss would be a major blow to a team that has not missed the playoffs since 2017.

Riverdale was 9-1-1 last season and won its region before exiting the AAAA state playoffs in the second round with a 7-0 loss to Dougherty.

Troup comes into the game 6-0 overall and 3-0 in region play. The Tigers are tied atop the region standings with Trinity Christian whom they will match up against on Oct. 28.