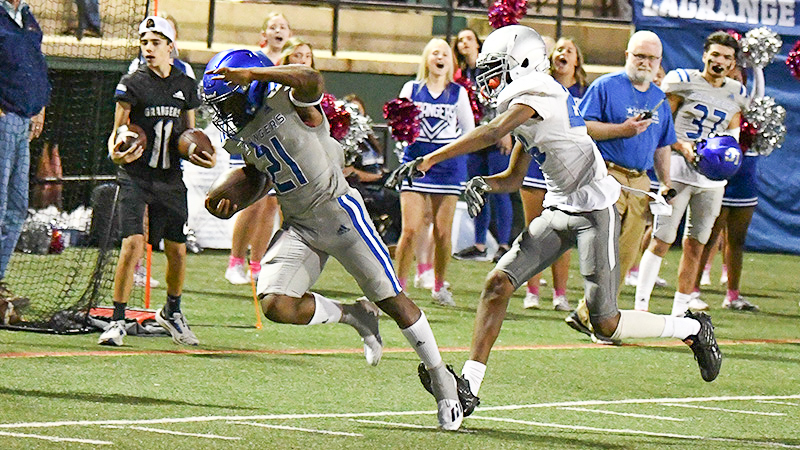 Home on the Grange.

LaGrange thrashed North Clayton 62-6 on homecoming to give the home crowd fans a reason to celebrate Friday night.

“We came out and executed the right way,” LaGrange coach Matt Napier said. “We did it the right way, and I’m proud of the ways our guys competed. We came out prepared and didn’t take them lightly.”

One of the guys who did it the right way was freshman Jardon Stringer, who has not seen a lot of game time this season but seized the moment under the Friday night lights. He had a 60+ yard reception for a touchdown as well as a 53-yard punt return touchdown to give the Grangers a 55-0 and 62-7 lead late in the game.

“You can see some of the special nature in Jardon Stringer,” Napier said. “He took a short screen 70 yards, and I’m just super proud of him.”

He was not the only talent who got on the score sheet. Steven Hill, a sophomore, caught a touchdown in the third quarter to make it 41-0.

“We have a bunch of young talent,” Napier said. “We’ve got a bunch of guys that have been playing at various levels and our coaching staff does a great job of getting them prepared.”

Sophomore Denorayon Reid has been making plays all season and made it two straight games with an interception when he picked off an Eagle pass on the first possession of the game for the Grangers defense.

“He’s a young playmaker, and he does it the right way,” Napier said. “He prepares well and has a great attitude. He’s a very coachable player.”

It was just the young guns lighting up the scoreboard, the old guard did their fair share of the work as well. Jaylan Brown hit newly minted homecoming king J’Arthur Dunn for a 50-yard touchdown on the opening possession of the game. Brown scored his team leading eighth rushing touchdown on the year when he scored from 11 yards out to make it 14-0 early in the first quarter. Brown proceeded to connect with Jaylon Jordan on a 30-yard touchdown pass in the second quarter. Brown has now thrown 11 touchdowns on the season to just one interception.

Another of the old guard who got back to business was AJ Tucker who scored touchdowns from 1-yard out and 88-yards out. The senior running back has been churning out big plays since returning as the starting running back against Whitewater in the Grangers fifth game of the season.

“Finally getting him healthy is huge,” Napier said. “He’s not just a bruiser, he’s got the ability to take it a long distance as well. We are proud of his growth and are happy to have him back healthy.”

Tayshon Lemon got the other score for the Grangers in the game when he jumped a route, intercepted the ball and returned it 22-yards into the endzone for a Granger touchdown to make it 41-0.

It was a complete team effort for the Grangers who got at least one touchdown on offense, defense and special teams.

LaGrange moves to 5-2 overall and 2-2 in region play. The Grangers will be back in action next Trinity Christian on Oct 21 after a bye week next Friday.

“We needed a week like this after a gauntlet in the region,” Napier said. “Games have been going down to the line, so it’s good to have a week where we come out of it healthy.”

Trinity Christian is 4-0 in region play and is tied atop the standings with Troup. LaGrange currently sits on the outside of the playoff standings in fifth place as the Grangers are tied with Starr’s Mill and Whitewater at 2-2, but lost the tiebreaker to both teams.