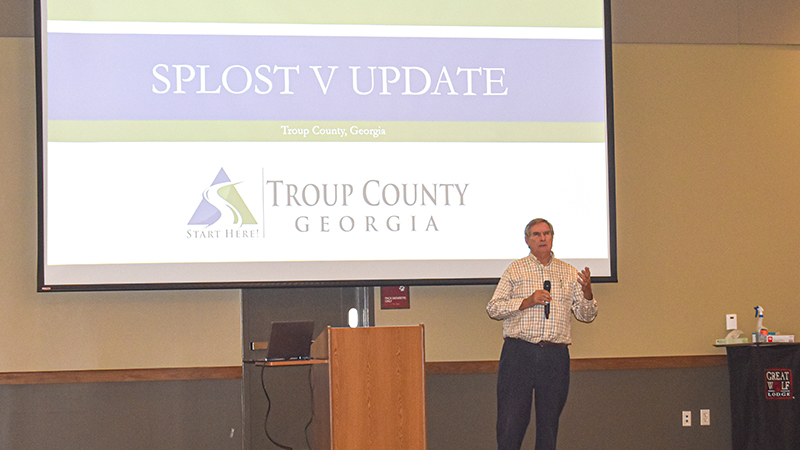 Representatives from Troup County and the Cities of LaGrange, Hogansville and West Point gave presentations on capital improvement projects they plan to ask the voters to approve in March 2023. If approved, the one-cent SPLOST sales tax would continue for an additional six years.

County Commission Chair Patrick Crews said the local governments get together every six years to discuss potential projects for the next SPLOST.

“The government has the ability to do a six-year intergovernmental agreement, where we can take those extra pennies — if the citizens approve — and use them for projects in our community,” Crews said.

Crews said Wednesday’s meeting was just the first big meeting to share ideas for the proposed projects. He noted that there will be many more public meetings on the issue before the SPLOST referendum is finalized. County Manager Eric Mosley said the referendum would likely need to be finalized by mid-December to prepare it for the ballot in March.

Crews said the county has a formula to divide the SPLOST funds, which is primarily based on population. Mosley said the proposed SPLOST is projected to generate about $80 million.

Under the proposed 45-45-5-5 split, the county and LaGrange would receive the largest sums at an estimated $34.2 million each, and West Point and Hogansville would get about $3.8 million each for their communities.

Crews said they are also considering two projects that would be paid for using the overall pool of SPLOST funds due to their importance to the whole county. The proposed countywide projects include a countywide traffic camera system and the resurfacing of Kia Pkwy.

LaGrange Police Chief Lou Dekmar presented a proposal to use SPLOST funds to pay for a countywide camera system.

Dekmar provided some of the successes he has seen since the City of LaGrange began its camera system program in 1990. The city was able to pay for the system using a federal grant back when everything was recorded on VHS. Since then, the system has been modernized to digital video that can capture both the scene and read license plates.

“I don’t think there is a day that goes by that our camera system isn’t used,” Dekmar said.

Dekmar said the system helps law enforcement track down criminals, as it did with five individuals charged with murder who were tracked to Mississippi using traffic cameras, but it can also provide exculpatory evidence.

Dekmar gave an example of an individual who was being questioned in Coweta County for arson. LPD was able to prove that the subject was in LaGrange when the fire started, so he was cleared as a suspect.

Each of the city police chiefs and the sheriff are in favor of the camera system, according to Dekmar.

As for privacy concerns, Dekmar noted that LPD has a policy of purging recordings that are not involved in investigations every 180 days. Logs are also kept so that they know who accesses the videos.

The proposed camera system is projected to cost about $2 million.

Due to the economic importance of the Kia Georgia Plant to all of Troup County, West Point is asking that Kia Parkway and several other roads around the manufacturing plant be repaired using countywide SPLOST funds.

West Point City Manager Ed Moon explained that the state built Kia Parkway, Kia Boulevard, Sorento Rd. and the Long Cane Creek Bridge as a part of the Kia project. When the state finished the project, they turned those roadways over to West Point, which added about five miles of four-lane highway to the city’s 42 miles to maintain.

When repair issues for Long Cane Creek Bridge are added, West Point simply cannot afford to maintain the roads, according to Moon.

“The estimate is currently $7.8 million,” Moon said. “That’s certainly far beyond the city’s capacity or our allocation of SPLOST funds.”

“The state does have some funds available, but it’s a small amount compared to the total cost of the project. There are grant funds out there, we’re looking at getting infrastructure funds that come from the federal government.”

“That’s the cost today,” said Moon, adding it could cost more or less by the time SPLOST VI is collected.

“It’s a road network that is in need of attention and want to make sure that we continue to support Kia Georgia,” he said.

Kelly advised that Hogansville was able to convert $1.2 million into $2.5 million through grant funding to make water and sewer repairs. They plan to repeat that with upcoming SPLOST dollars.

Hogansville also plans to use $1.45 million for roads, sidewalks and equipment.

Kelly noted that a lot of previous SPLOST funds have been used to improve existing sidewalks, but Hogansville still has streets in town that have no sidewalks at all. She said there has been a push to have new sidewalks as part of their plan.

Hogansville plans to commit $900,000 for parks and recreation and $450,000 on future equipment needs such as backhoes and excavators for numerous different projects.

LaGrange plans to use the biggest portion of its SPLOST funds, $10 million, to continue the expansion of the city’s multi-use trail, The Thread. LaGrange City Manager Meg Kelsey said it’s the city’s lead project.

“We’ve allocated about 40 percent of our dollars to that project because of how important that is,” Kelsey said.

The second biggest chunk of the city’s SPLOST dollars would go to public safety. The city plans to use the money for a new fire pumper truck, a new aerial truck, relocating fire station 2 to South Davis Rd., remodeling fire station 3, refacing fire stations 1 and 4 and finishing ongoing renovations to the LaGrange Police Department.

The city plans to use an additional $4.3 million for park upgrades, $4 million each for gateway corridor enhancements and road improvements, $1.2 million for utility relocations, and $1 million for stormwater management.

The new pool will be the only outdoor pool in Troup County that is open to the public.

Another $3,124,000 would be allocated for government center faculties and administrative equipment. The county plans to construct a new courtroom, replace the HVAC system and make repairs at the Troup County Government Center. The funds would also be used to purchase administrative vehicles and election equipment.

Moon advised that West Point intends to use its $3.8 million allocation to improve facilities, equipment, roads and sidewalks.

Moon said the city is also considering bonding out some of the funds to get the ball rolling on some of the more needed projects.