Hills and Dales hosts 11th annual Stories in the Garden 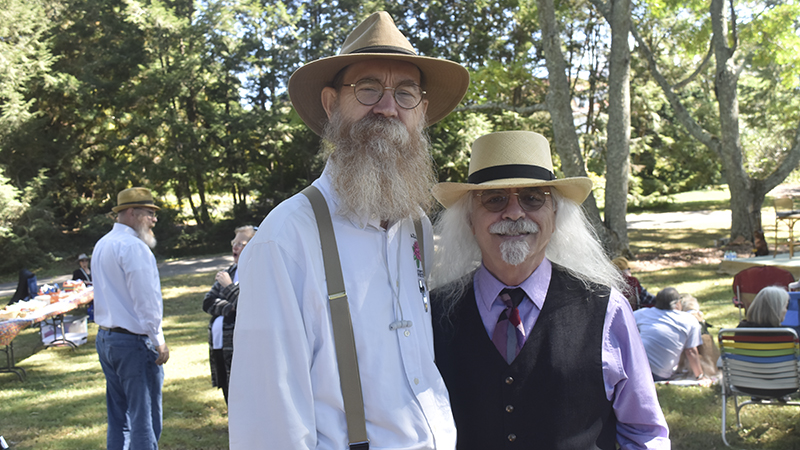 On a bright Sunday afternoon filled with laughter and stories of family, shrunken military suits and a pair of shoes two sizes too small, storytellers and listeners alike gathered at the Pecan Grove at Hills and Dales for the 11th annual Stories in the Gardens.

According to Joyce Young, committee member of the Azalea Storytelling Festival, this annual outing brought in the second largest crowd this event has had.

“When Fred Newman was here, we had about 300, but I’d say this is the next largest crowd,” Young said. “We just appreciate everybody coming out and giving us a chance to show off storytelling again.”

Headlining the event for this year was regional storyteller Michael Reno Harrell and local storyteller Pepper Hagebak. The emcee was Felecia Moore, a member of the Azalea Storytelling Festival who partners with the LaFayette Society for the Performing Arts (LSPA) in this yearly event.

Harrell, an award-winning songwriter and storyteller, took to the stage and told stories of his family’s famous matte Steinbach piano and the woes of getting older. As a musician, Harrell’s songs have been described as “Appalachian grit and wit.” As a storyteller, his talent as a wordsmith captivates audiences with as fans describe as “little movies.”

Harrell said he loves it in LaGrange and appreciated performing at the Pecan Grove.

“I always look forward to coming back to LaGrange. I’ve done the festival here several times and the people here are just wonderful,” Harrell said. “It’s one of my very favorite places to go, and I’ve traveled all over America. I have never found any place any prettier or any nicer people than right here.”

Hagebak’s story took the audience back to her childhood as she recanted the time fell in love with “winter-patented” Mary Janes.

“I have been accidentally telling stories my entire life,” Hagebak said. “When I joined the storytelling committee, I got involved and started learning about stories and from that I decided I wanted to try storytelling and have been telling for several years.”

Stories in the Garden is one of several free annual storytelling events offered by the Azalea Storytelling Festival Committee and LSPA.

The next storytelling event is set to take place in December with Donald Davis as a featured guest.