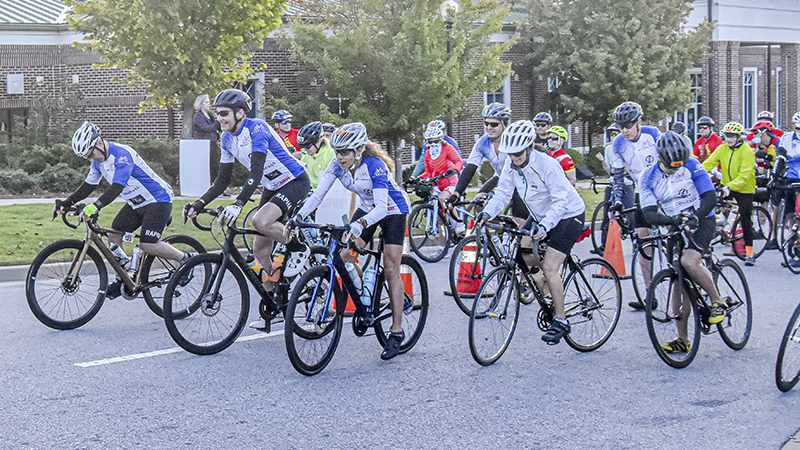 Over 200 cyclists from around Georgia and the nation took to the streets of LaGrange over the weekend to raise funds to help battle multiple sclerosis.

LaGrange hosted the annual Bike MS: Atlanta Peach Ride starting on Saturday. The two-day event has so far raised $237,428 toward its $325,000 goal.

Last year’s fundraising team leader, MiraStrong, lead off this year’s ride on Saturday morning. For this year’s race, they’re currently in second place behind Bonnie’s Team and Friends. They have time to make up ground, though. Fundraising for the event continues for 60 days after the ride. Both teams are named in honor of a friend or teammate who suffers from MS.

For many, the ride is their way of helping a loved one fight back against the devastating and unpredictable disease. A number of the riders have MS themselves like Mira Liniado, namesake of MiraStrong.

Volunteer Terri Corley said she is always impressed with the grit of not only the regular riders but especially those riding with MS.

“You would be surprised how many of the riders have MS,” Corley said, noting how impressed she is by those with MS that get on a bike and ride so far for others.

Corley said the ride gives her a chance to give back to the MS community for the support they gave her family and to honor the life of her brother, Steve Watson, who passed away from the disease nine years ago.

Watson was an Air Force veteran and a firefighter in Atlanta and Conyers before the debilitating disease took hold. Corley said her brother, who appeared to be perfectly healthy, was diagnosed with MS after he fell and broke a bone.

Corley said it was heartbreaking to watch someone so healthy and important to her succumb to the disease. She said the last three years of his life were horrific.

Corley said the ride and the funds that it raises give her hope that one day multiple sclerosis will be curable.

“I watched the progress when my brother died nine years ago. There was a shot that he took every other day. That shot now is being given once every six months,” she said. “They’re getting closer and closer to a cure for MS.”

“What really touches me about the MS foundation is how much of the money raised goes into research,” Corely said. “Everything that doesn’t go into the cost of having the race all goes to research.”

Corley said she began volunteering with Bike MS eight years ago after her brother passed. She currently serves as the lead volunteer for the LaGrange bike ride.

According to Corley, Bike MS raises about $45 million per year for its fight against MS. The Bike MS: Atlanta Peach Ride, which is Georgia’s only ride, has been held in LaGrange for the last few years and typically raises $350,000 or more. Corley said COVID has caused some teams to forego the event, but it’s bouncing back.