Rivalry showdown: LHS and Troup matchup Tuesday with a spot in the region title game on the line 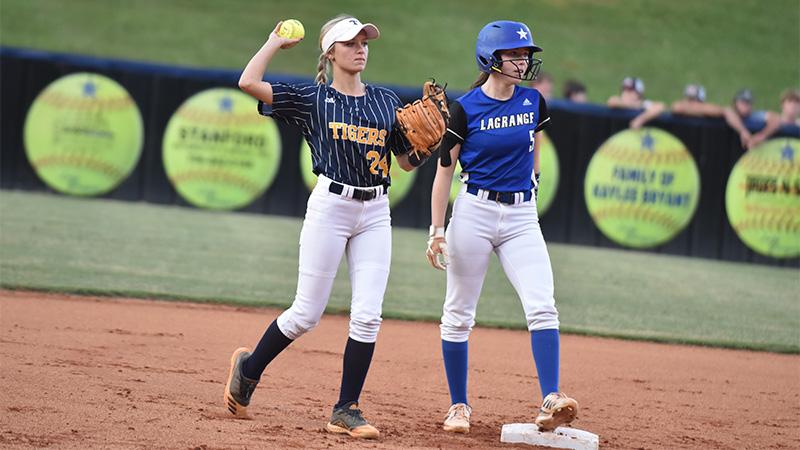 Tuesday, a showdown between LaGrange and Troup will decide which team will advance to the region championship game.

It has been a successful season for both teams as LaGrange finished second, just ahead of Troup in the region 4-AAAA standings. Everything has been building up for Tuesday’s showdown between the no. 2 and no. 3 team in the region. LaGrange finished one game ahead of the Tigers in large part because the Grangers won both region matchups between the two teams. The Tigers were able to win the first matchup of the season 7-3, but it had no impact on the region standings.

LaGrange comes into the game having won eight out of its last 10 games. The Grangers will be down one of the star pitchers in Kaylee Foster, who will be out for the rest of the season with a knee injury. Zoe Thompson will likely get the start on Tuesday, but the Grangers pitching depth will be tested in the region tournament and into the state playoffs. Expect to see Kaylee Bryant get more time on the mound with a combination of Harlee Overton and Kimberly “KK” Reynolds getting some time on the mound as well.

Carolyne Garcia has been on a tear to end the season. She went 9-for-9 with 10 RBIs and three home runs over the final four games and will be a pivotal player for the Grangers heading into the playoffs. Bryant is more than just a pitcher for the Grangers. The senior leader has been one of the most consistent offensive presences for the Grangers this season, hitting .633 with 14 RBIs over the last 10 games of the season. Reynolds, a sophomore, has been another key piece to the puzzle offensively. She is hitting over .350 on the season with 27 RBIs and 25 runs scored with two runs.

Troup has gone 5-5 in its last ten games but did enjoy two massive wins over a quality Trinity Christian team. The Tigers rode a Camdyn Bassett seventh inning home run to beat Trinity Christian in their final regular season game of the year. It will be either Bassett or McDonald getting the start on the mound for the Tigers on Tuesday as they have combined to pitch 82.7% of the Tigers total innings this season. Both players have eight starts with Bassett’s ERA of just 1.67 second on the team only to Faith Horton (1.08).

McDonald is also the team’s most efficient offensive player. Her batting average of .421 leads the team amongst players with at least 15 plate appearances on the season. She also leads the team with 18 RBIs. Freshman phenom Sheniyah Philpot has cooled off a bit in recent weeks, but is still hitting .405 and can consistently find holes in a team’s defense. Junior Ramsey Clark has been efficient getting on base (.418) from the top of the order and leads the team with 23 runs scored. Team’s also have to be aware of Bassett’s power as she has four home runs on the season.