Athlete of the week: Magic Johnson has more than one trick up his sleeve 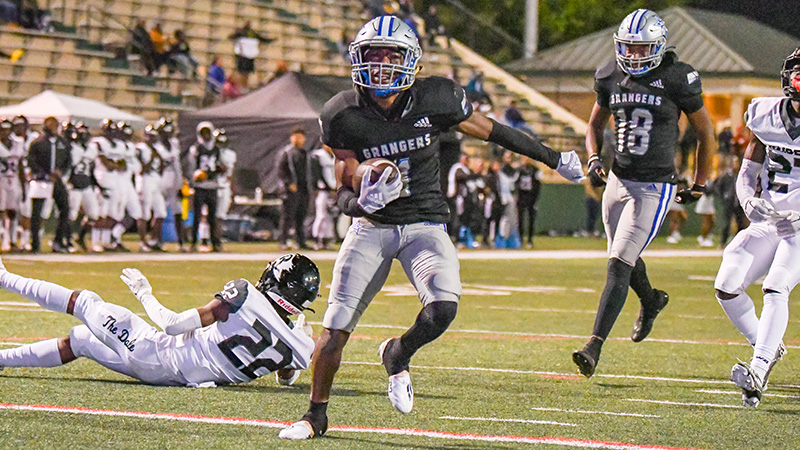 Magic Johnson won athlete of the week with five catches, 118 yards and two dazzling touchdown catches for LaGrange in its  28-14 win over Riverdale, but he has been pulling rabbits out of his hat all season.

Johnson’s 27 receptions are twenty more than the next highest wide receiver on the Grangers team. He is not just catching screens and taking them for a big gain, he catches deep balls, blocks and, of course, is not afraid of physical contact like he displayed against Riverdale.

“Some people don’t expect me to lower my shoulder,” Johnson said. “They think I just run around, but I’m not afraid to hit you.”

His 521 receiving yards is also double the next highest total on the team and Johnson leads the team with five receiving touchdowns. With the ball in his hands, Johnson is tough to bring down.

“You got to catch me to tackle me,” Johnson said. “I’m not going to let one person tackle me. You’re going to have to bring two, three, four.”

It was not always this way. Johnson was not happy with his performance last season. He felt like he did not contribute to the best of his ability.

“I didn’t like how the season went last year,” Johnson said. “It made me want to work even harder this year. In my opinion, I really didn’t do anything last year, so I wanted to work harder to get my name out there this year.”

He is getting his name out there with his all-around abilities. Johnson is far from a one trick pony and has a 38 yard rush and a long kick return of 72 yards. His ability to make plays all over the field is crucial for the Grangers.

It was not an overnight turnaround for Johnson. He had to work to improve and has made gains this season. For Johnson, it all starts with how he has matured in the way he processes a game.

“I used to get frustrated a lot and scream and yell a lot,” Johnson said. “I really improved the mental part of the game, and I don’t get too frustrated anymore.”

It is not just his play on the field that is turning heads. He also stepped up as a leader on this team in his final year as a Granger. He’s the most experienced player in the LaGrange wide receiver room.

“I’m older now, so I have to set the example,” Johnson said.

Another reason for Johnson’s breakout campaign is the connection he has forged with starting quarterback Jaylan Brown. The two have been playing together since middle school.

“We only had about two or three plays in middle school, and one of them was to throw it up to me the other two were me or him running the ball,” Johnson said. “He trusts me, and I trust him.”

Johnson has not always been a wide receiver. He has played some defense, but came to LaGrange High as a running back. He converted to wide receiver during his sophomore year and never looked back. Johnson had no qualms with the change in position as he was just looking to contribute in any way he could.

He has contributed to the Grangers and now wants to contribute at the next level. He already has an offer from Warner University but is waiting to make his final collegiate decision until after the end of the season.

The end of the season is nigh as the Grangers have just three regular season games left and any potential playoff games if they make it into the state tournament. This means that Johnson’s time at LaGrange High is nearing its end.

“I know when it ends I will be feeling some type of way,” Johnson said. “It will be sad, but it will be time to hit the next level.”