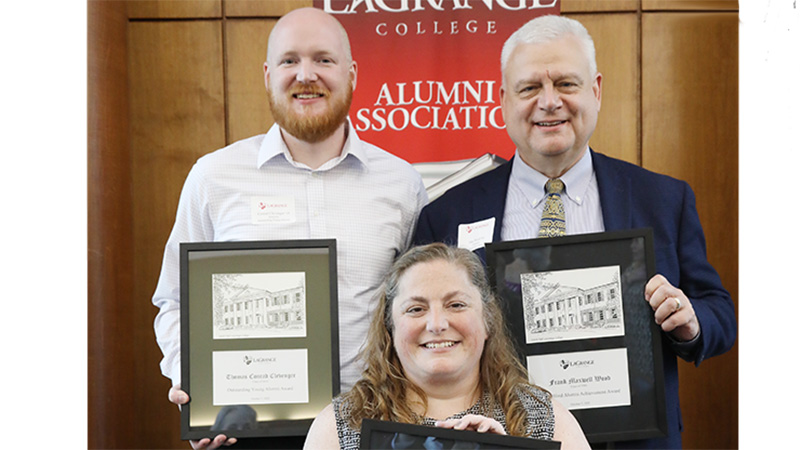 Three LaGrange College graduates were named the recipients of the college’s 2022 alumni awards at a luncheon hosted by the college on Oct. 7.

Started in 2014, the Outstanding Young Alumni award recognizes individuals who graduated from LaGrange College within the past ten years and who have distinguished themselves in their career and/or community and brought honor to their alma mater.

Established in 1990, the Shackelford Alumni Achievement award is given to individuals who have distinguished themselves professionally and brought honor to the college. The award is named for Walter Malcolm Shackelford, a former professor of education (1958-1972) and academic dean of the college (1972-1982).

At LaGrange College, Clevenger participated in the Wilkinson Family Servant Scholars program. As a member of the program’s first cohort, he volunteered his time at Circles of Troup County and Our Daily Bread, an organization he co-founded in 2012.

He and his wife Abigail, have one son, Landon.

Decker is a pediatric peritoneal dialysis coordinator at DaVita Dialysis. In her role, she conducts patient home visits to assess safety of environment for home dialysis and coordinates family-centered care of pediatric dialysis patients.

Decker is also a clinical nurse educator in the transplant stepdown unit of Children’s Healthcare of Atlanta: Egleston, where she is responsible for training new clinical staff and caring for patients aged birth to 21 who are either pre- or post-kidney or liver transplant, in kidney or liver failure, dialysis dependent or have short gut syndrome and are in the intestinal rehab program.

She earned a bachelor’s degree in nursing from LaGrange College.

While at LaGrange, Decker was a member of the Lambda Chi chapter of Alpha Omicron Pi and has been the fraternity’s alumnae advisor since 2003. Decker was inducted into the LaGrange College Nursing Honor Society in 2004.

She is active in her community, volunteering as a nurse at Camp Independence, a place for children who are on dialysis or have had a transplant. Decker also serves in the nursery at her church, St. Mary Magdalene.

Wood is the Director of the Office of Hearing and Appeals at the U.S. Department of Agriculture, where he oversees 30 administrative law judges in Alexandria, Virginia.

Previously, he was the Attorney Advisor for Air Force Material Command at Robins Air Force Base in Warner Robins, Georgia.

He earned a bachelor’s degree in history from LaGrange College, a Juris Doctorate from the University of Georgia School of Law and a post-graduate degree from the Air War College at The Air University at Maxwell Air Force Base.

Before retiring with the rank of Colonel in 2016, Wood served 34 years in part-time and full-time roles in the United States Air Force and Georgia Air National Guard. He worked as a Judge Advocate and a reserve Air Force officer, with active-duty deployments that included traveling to the Philippines, Iraq and Pakistan. While in Baghdad, he served one year as the Department of Justice attaché to the U.S. Embassy.

In addition to his military service, he also has an extensive legal career that spans 37 years.

Following his five-year stint as a General Practitioner at his private law firm in Macon, Wood was appointed by President George W. Bush to serve as the U.S. Attorney for the 70-county Middle District of Georgia.

After working during both of President Bush’s terms in office, Wood continued his public service in the role of chief administrative law judge of the State of Georgia, where he spent six years working in the administration of former Governor Nathan Deal.

He and his wife, Suzanne, have three children.