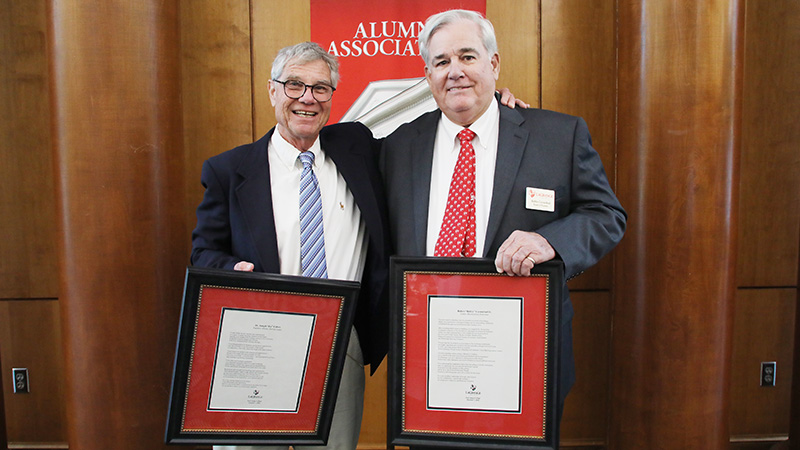 Established in 2012, the Honorary Alumni award recognizes individuals who have achieved a distinguished record of service, support, advocacy and commitment on behalf of LaGrange College.

Dr. Cafaro came to LaGrange College in 1984 as a history professor, a position he held until his retirement in 2017. Previously, Cafaro taught at Florida State University and Tallahassee Community College.

While at LaGrange, he prepared three lectures focusing on Spain, Croatia and Vietnam for the college’s 3D Journeys program. Cafaro also helped with the implementation of “Gateway to Success,” a college 101 program for entering freshmen. He served as its co-director from 1987-2000 and 2009-2011.

Cafaro is a two-time recipient of the United Methodist General Board of Higher Education and Ministry Exemplary Teacher Award. He has also received the John R. Hines Undergraduate Research Faculty Award and the Vulcan Materials Company Teaching Excellence Award.

In his retirement, Cafaro became involved with Panther Treks, a LaGrange College alumni travel program that ran through 2020. He led trips in England, France and Italy.

He and his wife, Beth, have three children.

Carmichael, who has been a board member since 1994, was first elected chairman in 2018. He has worked on the college’s three most recent presidential search committees.

He earned a bachelor’s degree in accounting from Auburn University and a graduate degree from Louisiana State University’s School of Banking.

In 2017, the LaGrange-Troup County Chamber of Commerce named Carmichael the first recipient of the Tom Hall Innovation Award.

He and his wife, Molly, have two sons and four grandchildren.