Back on home turf: LCS is set to play its first home game in nearly a month 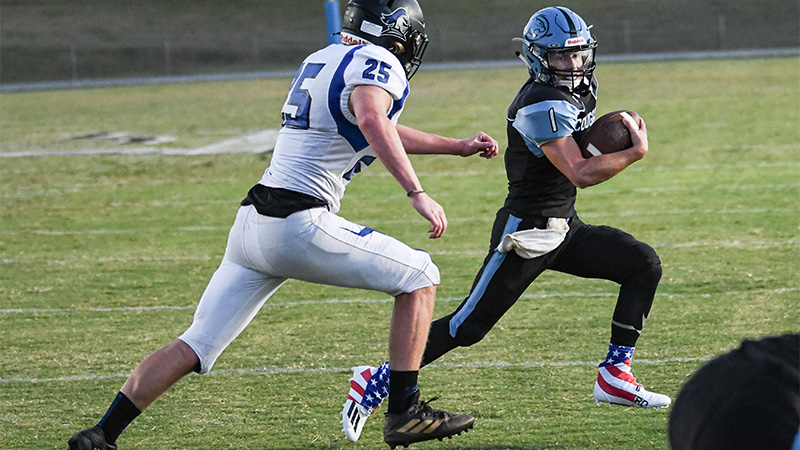 After a bye week, the Lafayette Christian School football team will be back in action on Friday night on the Cougars home turf as they take on Hearts Academy.

“It was a good week off to get some guys healed up and rested,” Cougar coach Jared Pike said. “It was hard to get them out to practice over fall break, however, as most of them were out of town.”

The Cougars will be happy to return to action on their home field after a long stretch without a home game. In fact, it will be their first home game since way back on Sept. 16 for homecoming.

“It’s great to be back at home,” Pike said. “There is so much less prep work that goes into it. The kids love playing in front of the home fans.”

The Cougars will get a chance to play just their third home game of the season against a high flying Hearts Academy team. The Panthers are coming into the game 4-2 with a 40-8 loss to Kings Way Christian School last time out. The Panthers have a quick footed quarterback that can stretch the field with his arms and legs. The Cougars will have to prepare for some spread looks as the Panthers will look to get some of the Cougars younger defenders in space.

“They will do a lot of quarterback draws and speed options,” Pike said. “They are going to rely on the quarterback to be an athlete and make plays. He can throw some too, so we will be keeping an eye on him.”

The Cougars defense has seen some shuffling in recent weeks especially with Alex Tusing — the team’s starting safety — going down with a season ending injury just a few weeks ago. This has meant that Braden Firth and Ephraim Snyder have had to take on more defensive reps despite being primarily offensive players. Snyder sees time at linebacker while Firth slots in at safety and is the signal caller for the defensive side of the ball.

The Cougars offense is predicated on the run with some splash plays in the passing game to balance out the offensive attack.

Without Tusing to sell him in the backfield, Snyder will once again have to carry the load offensively. Snyder had 250 yards and four touchdowns in the Cougars last game out which was a 50-43 win over Fideles.

“We don’t want to run him ragged, but when you’re the man, you’re going to get run ragged,” Pike said.

Brandon Davenport, a freshman, will be called on to relieve Snyder when he needs a rest. The offensive line consisting of Liam Carrol, Baylor Wise and Gabriel Bridges have been a major reason why the running game has been so successful this season for the Cougars.

Starting quarterback Andrew Hough will be asked to use both his legs and arms once again this week. He finished the last game with 130 passing yards, 50 rushing yards and two passing touchdowns, both to Braden Firth. The Hough-Firth connection is pivotal for the Cougars. Firth has caught a touchdown pass in every game since returning from a knee injury in Lafayette Christian’s third game of the season.

Lafayette Christian enters the game with an overall record of 4-2 and a 1-1 region record. The game against Hearts Academy is a non-region affair and will give the Cougars a chance to grab some momentum heading into the home stretch of the regular season.

“Hopefully, we can come together and start getting hot and get in a groove, so we can make a run to the playoffs here,” Pike said.