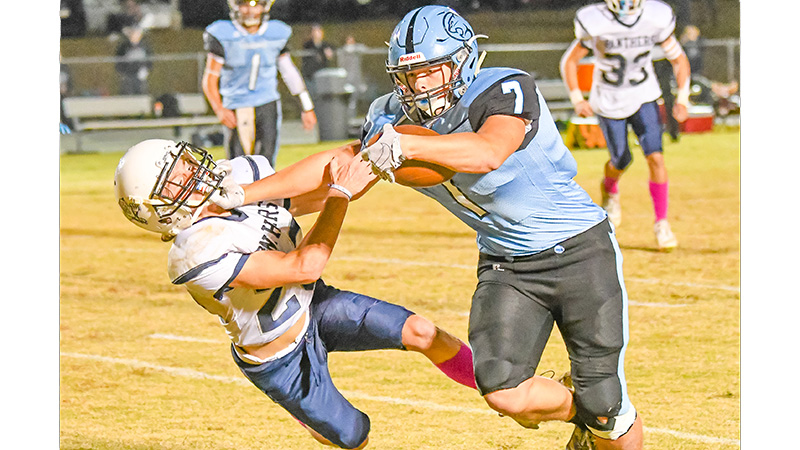 It was a celebratory occasion all-around for Lafayette Christian on Friday, as the school honored former players on alumni night as well as a big 62-16 win over Hearts Academy.

“We had a pretty good performance, and everybody played well,” Cougar coach Jared Pike said. “Nobody got hurt, which was the biggest thing.”

Injuries have plagued the Cougars all season long as they are currently down their best athlete in Alex Tusing among others.

This means that Braden Firth and Ephraim Snyder have had to play more snaps on the defensive sides of the ball. Their talents paid dividends on Friday night as Firth got an interception and Snyder opened the scoring in the game with a 62-yard fumble recovery for a touchdown. Firth got his interception on the next possession, which set up a Snyder touchdown run from 5-yards out and the Cougars had a quick 16-0 lead.

Hearts answered with a long touchdown run to cut the lead to just one score, the closest it would be the rest of the way.

“We still came out a little sluggish in the first quarter,” Pike said. “We still have to work on that, but the rest of the game, we executed. When we run our stuff and play as a team we are tough to beat.”

Andrew Hough hit Firth for a 49-yard touchdown pass to give the Cougars a 24-8 lead heading into the second quarter and a little bit of breathing room. It was Hough’s only touchdown of the game, but he commanded the offense en route to 200 yards rushing and throwing combined.

Snyder went to work in the second quarter and scored both the Cougars touchdowns in the quarter on a 36-yard run and a 38-yard run. Snyder finished with 145 yards and four rushing touchdowns.

Lafayette Christian took a 48-8 lead into the halftime break.

The backups came in during the second half as the game had a running clock.

Davenport, a freshman, will be key for the Cougars going forward as he helps to replace Tusing’s all-around versatility on offense.

The Cougars defense was strong on the night as well. Cal Evert and Wise were everywhere for the defense and led the team in tackles.

It was a special occasion at halftime as well with the Cougars retiring Eli Shepherd’s jersey. Shepherd helped lead the Cougars to a state title in 2015 before embarking on a collegiate football career, which he still enjoys to this day. He is the Savannah State starting nose guard in his final year of college football eligibility.

“They don’t care how small your school is, if you get your stuff out there they will find you, and they are going to recruit you,” Pike said. “We can go play (at the next level). It’s about getting them motivated and working for it. You got to hit the weight room and send the highlight video out.”

The Cougars played inspired as they improved to 5-2 overall. Lafayette Christian has a 1-1 region record and will have a pivotal region matchup against Johnson Ferry at home next Friday.

“To get a win like that boosts our confidence,” Pike said. “This game gave us an opportunity to try some stuff that we don’t normally get to try.”