Senior spotlight: AJ Tucker is back in a starting role for the Grangers 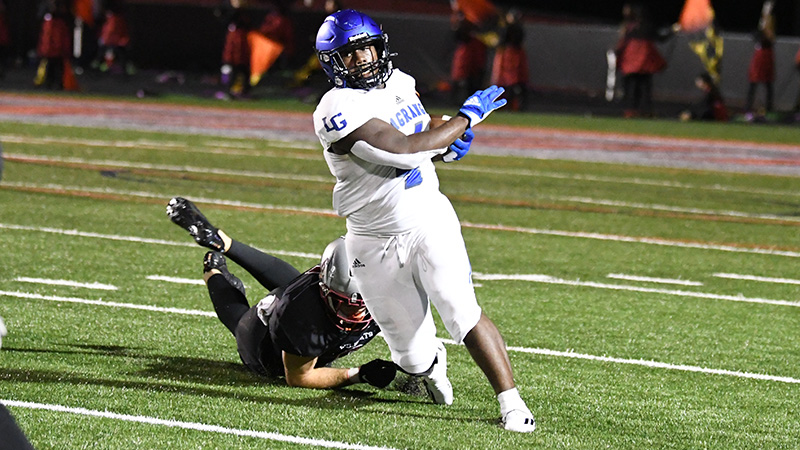 AJ Tucker is back healthy and steamrolling defenders for the LaGrange football team. The bruising running back was banged up at the beginning of the season, but reclaimed the starting running back role against Whitewater in the Grangers fourth game of the season and has not looked back.

“I was hurt for a few weeks, but besides that this season has been great,” Tucker said. “I’m a pusher and a fighter, so I was conditioning and training and all that stuff.”

Tucker is starting to gather some momentum and has now accumulated 470 rushing yards and seven rushing touchdowns this season. Tucker has had his best two games the last two times out against Riverdale and North Clayton. He carried the ball 14 times for 153 yards and a touchdown before getting an even lighter load last time against North Clayton as the starters got some rest after a dominant first half. Tucker had two carries in that game — an 88-yard touchdown run and a two-yard touchdown run.

“It feels good to be back in the starting role,” Tucker said. “It’s a good feeling to be back really.”

Tucker kept a positive outlook despite not getting as much action at the beginning of the season. This combined with a two game losing stretch for the Grangers in the middle of region play could have frustrated some players, but not Tucker.

“Everything isn’t always going to go well,” Tucker said. “You’re going to have bad weeks where you don’t get many yards.”

Tucker has taken on more leadership this year as a senior. Being the only upperclassman in the running back room means that Tucker has had to be a steady presence in the locker room for the young guys.

Tucker was not getting as many reps at running back at the beginning of the season because of the emergence of sophomore running back Malachi Fannin-Render. This meant that Tucker was lining up more at linebacker on defense to start the 2022 campaign.

“Most people probably don’t know this, my first two years in high school I started at linebacker,” Tucker said. “I’ve been playing linebacker and running back my whole life so I already knew how to play both positions, so when the role opened up and they needed me to switch over and play running back that’s what I did.”

This season has been tough sledding for the Grangers at times, but Tucker embraces the challenge.

“It’s crazy because last year we were in a region with teams from Columbus where it felt like we were winning every game to now, where every week is a dogfight,” Tucker said.

Tucker is on the verge of taking his thumping style of running to the next level as well. The senior running back has offers from Maryville College and Warner University, but is waiting to make his final collegiate decision until after his high school football season concludes.

The conclusion of his high school season is fast approaching. He has just three regular season games left as the Grangers scrap and fight for a playoff spot.

“I take it one step at a time, game by game,” Tucker said. “We are really living in our last days. We have to win the rest of our games so we are taking it week by week.”

Tucker spent his first two years attending Troup, but now feels like a Granger for life.

“It’s a tradition,” Tucker said. “My mom and dad went to LaGrange.”