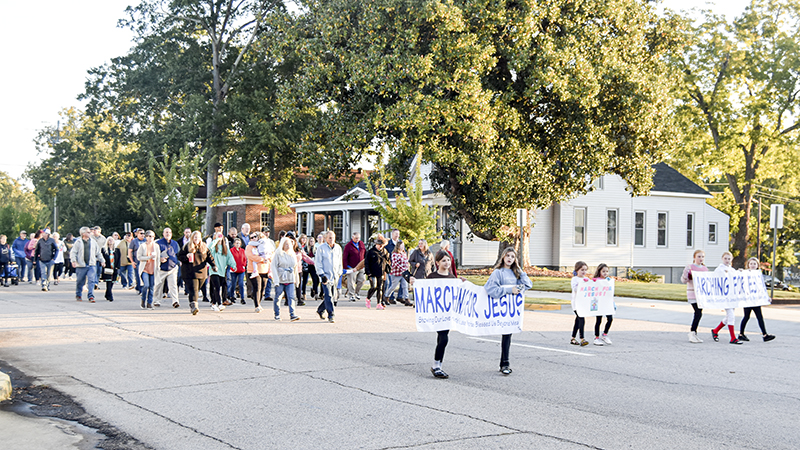 The seventh annual March for Jesus returned to the streets of LaGrange on Saturday morning.

The event is held in part to give community leaders and people of faith an opportunity to publicly share their beliefs. Dozens of local Christian faithful marched through LaGrange and even more joined them at the square for an open-air church service.

Dr. Joe Almand, who started the event with his wife, Doris, eight years ago, said they invite all churches from around the area to participate and celebrate the gospel, but they encourage them to not be political. The march has been held annually since its inception except for one year due to the pandemic.

“Everyone is welcome to attend,” said Almand, noting the event is non-denominational and non-political.

Sheriff James Woodruff escorted the group as they marched down Church St. toward the square. Woodruff later spoke as he has done each year since the event began.

Woodruff said that the march is important for the people of LaGrange, particularly with the ongoing world and local events.

“Just here in LaGrange, just look at the crime and tragedy. There’s no regard for human life,” Woodruff said. “The Lord has put me in a place from such a time as this, maybe I can make a difference. But you know, just in the years I’ve been in the sheriff, the numbers in the jail have grown, crime has grown and how horrible things have gotten.”

Woodruff noted that they currently have a record number of people in jail.

Woodruff said he allows more than 30 ministries into the jail to speak to inmates.

“Thirty-something ministries to come into that jail every month and minister to those men and women,” Woodruff said. “Some might have to repay society for what they did, but if they are really going to turn their life around, it has to be the blood of Jesus.”