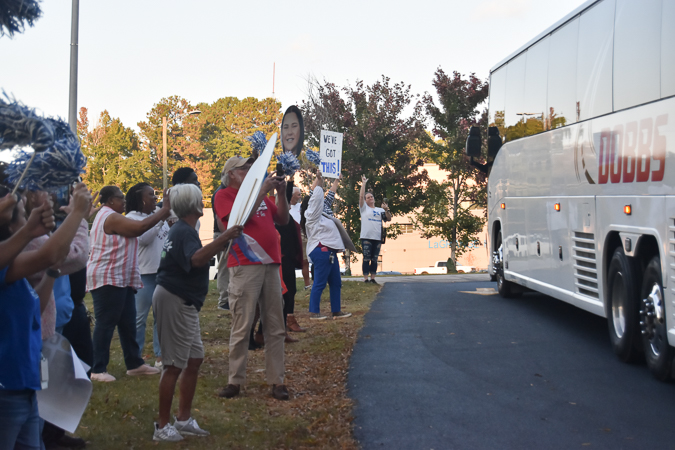 All three local public schools are sending their teams to the playoffs once again in 2022. Callaway, LaGrange and Troup battled through marathon seasons to book their ticket to the big dance.

This year’s state playoff tournament will be quite a bit different from years past. Gone are the days of three round series in the opening rounds, instead there will be super regionals with the winner of the super regional heading to the quarterfinals. Each team will play a minimum of two games and a maximum of five in the super regionals.

The Cavaliers will be heading to the AA state playoffs as a no. 2 seed. Callaway will be playing its super regional at Union County High School in northeast Georgia. The first game of the super regionals will see the Cavaliers take on Walker (11-8), who finished third in region 6-AA. The team’s share no common opponents this season, so their matchup will have little to go on coming into the game.

While Callaway is a strong 9-5 at home, they are just 5-9 away from home. Walker on the other hand went 5-5 in games away from its home field. This should be a tossup as the Cavaliers are ranked 24 in AA while Walker is ranked 26.

Walker will enter the game having played just one game in the last week and a half — an 8-6 loss to Darlington last Tuesday. Walker is just 4-6 in its last 10 games of the season. On the flipside, the Cavaliers are 5-5 in their last 10 games including two victories over AAAA Shaw last week.

Callaway will see Mackenzie Toney and Kaitlyn Williams get the starts on the mound in the super regional. Toney, a freshman, and the sophomore Williams have been the main two pitchers for the Cavaliers this season and will be relied on heavily as the season enters its final phase.  Offensively, the Cavaliers are led by upperclassman Emma Bryan and Ava Shuford. Bryan brings the steady get on base percentage (.456) while Shuford brings some power. Shuford leads the team in extra base hits (10), RBIs (14), and runs scored (22), all while hitting .371 from the plate. Senior Mackenzie Rhodes has been a solid presence for the Cavaliers all season at shortstop and will need her rangy defense even more in the playoffs.

Potential X factor: Freshman Savannah Rice who has been deployed as a utility player all over the infield and is leading the team with three triples while hitting .306 from the plate.

The Grangers fell just short of claiming a region title in the first season under the stewardship of Craig Mobley but still earned a second seed in the playoffs. LaGrange will open with Islands High School (15-6) out of Savannah at 10 a.m. on Tuesday before playing either Cairo or Griffin in the second game depending on results.

Both teams have been strong at neutral sites this season with the Grangers going 5-2 and the Sharks going 2-0. The Sharks are just 3-3 in their last six games, including a 2-1 loss to Wayne County last time out. LaGrange is also 3-3 in its last six games and are on a three game losing streak entering the playoffs.

The Grangers come into the playoffs mostly healthy but will be missing a big piece of the puzzle in starting pitcher Kaylee Foster, who is out for the season with a knee injury. The dynamic duo of Kaylee Bryant and Zoe Thompson will have to fill the void. Thompson has been the Grangers steadiest pitcher this season while Bryant, a senior, will see her time on the mound increase exponentially in the playoffs. Bryant’s leadership and offensive threat are key components for the Grangers success. Bryant is first in hits (34), third on the team in batting average (.427), tied for second in RBIs (22) and tied for third in runs scored (21). Two sophomores — Kimberly Reynolds and Carolyne Garcia — will also be a big part of the offensive puzzle. Reynolds leads the team with 28 RBIs while hitting over .350 with two home runs. Garcia is tied for the team lead in home runs with (3) while also hitting nearly .450 from the plate.

Potential X factor: Hudson Wood leads the team in runs scored (31), tied for second in RBIs (22) and is tied for the lead in home runs (3). Her ability to get on board for the Grangers from the top of the order could be key.

The team’s share no common opponents between them this season.

After going 6-14 in AAAAA last season, the Yellow Jackets have enjoyed their move down to the AAAA classification this year.

Neither team will be riding much momentum into the playoffs as the Yellow Jackets are 3-3 in their last six games while the Tigers are just 2-4 and are on a two game losing streak. The Tigers will play either Perry or Westover in their second game of the super regional depending on results from the other game.

The Tigers will be riding the two-way play of Maggie McDonald and Camdyn Bassett. McDonald is the elder statesman and has been one of the most consistent bats to go along with her pitching, hitting .381 while leading the team in extra base hits (10) and RBIs (18). McDonald will also see plenty of time on the mound as well. While not as polished offensively, Bassett has been the team’s best pitcher on the season. She leads the team in innings pitched (56 and 1/3rd), strikeouts (67) while only allowing 12 earned runs all season for an ERA that sits at 1.49 heading into the playoffs. Offensively, she is first on the team in home runs (4) and second in RBIs (13).

Freshman outfield Sheniyah Philpot is hitting .383 and her combination of quality defense and offense is key for the Tigers. Haley Cotton has flown under the radar this season, but her .492 on base percentage leads the team among plates with at least 15 plate appearances.

Potential X factor: Ramsey Clarks ability to steal bases. She leads the team with 22 and has only been caught twice while the rest of the team combined to steal 32 bases. Clark is leading the team in batting average (.400) among players with at least 15 plate appearances and runs scored (23).