Athlete of the week: Camdyn Bassett hits dingers and strikes batters out 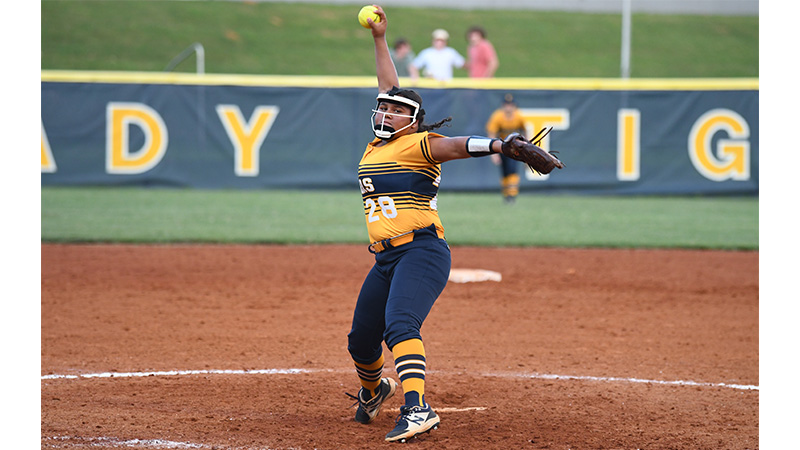 Camdyn Bassett hits dingers and strikes batters out, it is just what she does. The Troup High sophomore has enjoyed a true breakout campaign culminating in a seventh inning home run against Trinity Christian to give the Tigers the win and the third seed in the region tournament.

“It was definitely nerve wracking,” Bassett said. “There is pressure on you, but when you know the girls in front of you and behind you have your back it makes you excited for those opportunities as well.”

Bassett leads the county in home runs this year (4) and none of hers has been of the inside the park variety. She has watched all four of hers sail over the wall as she trotted home to thunderous applause and a warm welcome from her teammates. The power comes naturally, she says.

Just because she has natural talent, does not mean she hasn’t worked her tail off to get in this position.

“It’s not all about what everyone else sees. It’s about what you do behind closed doors,” Bassett said. “I try to hit and pitch in the yard at home a few times a week.”

That is on top of playing for Troup and a travel ball team. She is consuming so much softball for a purpose.

Bassett believes that she still has room for improvement offensively. She wants to make better contact and keep a strong top hand so that she does not fly out and pop out going forward.

She is currently second on the team in RBIs (16) and has an on base percentage of .365.

While she makes headlines with the home runs, it is her pitching that is winning plaudits far and wide. She has supplanted Maggie McDonald — a good pitcher in her own right that will be playing college softball next year — as the team’s no. 1 pitcher this season.

“Maggie’s our ace, and I really look up to her,” Bassett said. “She’s committed at a D-II level. It’s nice to have somebody to grow with and learn from.”

When she is not pitching, she is the team’s starting third baseman.

Basset knows that Troup will be in a transition year next season. The Tigers will be losing eight seniors who have helped Bassett grow up on the diamond.

“I’m really close with this year’s seniors, and it’s going to be hard to watch them go,” Bassett said. “They are what makes Troup softball. There are a lot of girls that make up a team, but all of them are our foundation.”

It is not just her teammates that have helped her accumulate herself to varsity over the last two years, it is the coaches as well.

“(Ryan) Simpson always tries to work me through difficult situations. She helped with my mentality from freshman to sophomore year. She had faith in me, and that’s where my confidence comes from,” Bassett said. “I know (Haley) Dodgins is going to be our biggest supporter and our biggest hype man no matter what. She’s always going to be in your corner.”

Softball is her no. 1 sport, but you can also find her suiting up for the Tigers flag football team as well when it kicks off this fall.

This is just the beginning of Bassett’s sporting career at Troup. With two and a half more years as a Tiger, Bassett still has room to grow and flourish.