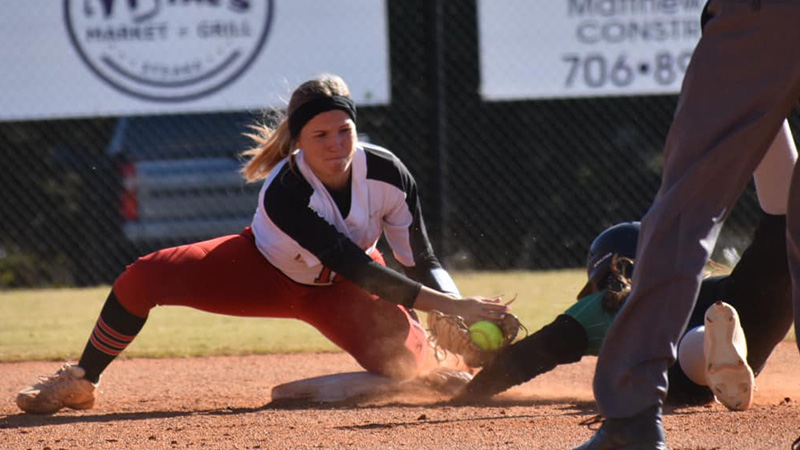 Despite jumping out to an early lead, it was not to be for Callaway who lost 12-8 to Murray County on Wednesday as the Cavaliers exited the playoffs.

Despite the losing effort, Mackenzie Rhodes was fabulous in her last outing as a Cavalier. The senior went 4-for-5 with 2 RBIs and a run scored to lead the offense on the night and, ultimately, end her softball career at Callaway on a bittersweet note.

The Cavaliers season comes to an end, but the girls draped in red and black did not go down without a fight. It looked like it might be Callaway’s day when the Cavaliers scored two runs in the bottom of the first inning. Karlie Walker and Kinley Smith each had an RBI single to quickly make it 2-0.

The Indians answered with three runs in the top of the second to take the lead. All three runs came with two outs as the Cavaliers committed two fatal errors. The Indians added another two in the third and three in the fourth to make 8-2 Murray County.

Callaway kept swinging back and plated another two runs in the bottom of the fourth to chip into the Indian lead. Kylah Harris grounded out to drive in a run before Emma Bryan did the same later in the inning.

The Indians were able to grab an insurance run in the fifth inning and the sixth inning to make it 10-4.

The Cavaliers kept fighting. Ava Shuford reached on an error which allowed Harris and Bryan to score a run and the Cavaliers once again had life. Unfortunately, Callaway could not score any more runs in the inning despite having runners on first and second with no outs.

The Indians answered the Cavaliers salvo with a two-run seventh inning to extend their lead back out to six.

Again, the Cavaliers swung back. Backs against the wall in the bottom of the seventh inning, it was Rhodes who answered the bell with a two-run single. With runners on second and third with one out, Callaway was not able to score another run in the game as it just was not to be.

Kaitlyn Williams got the start on the mound and pitched four innings before freshman Mackenzie Toney came in to relieve her for the final three innings of the game. Williams helped her cause at the plate as well, going 2-for-4 with a run scored.

It was a game that was truly decided by the four Cavalier errors as the Indians only had two in the game. Callaway and Murray County each had 12 hits in the game.

Walker was 2-for-4 with an RBI. Shuford had a hit, a run scored and an RBI. Savannah Rice, Brianna Patillo and Smith all had a hit apiece.

Along with Rhodes, Bryan also wrapped her career as a Cavalier softball player. The ever versatile outfielder Bryan and the rangy shortstop Rhodes will be hard to replace in 2023 season.

Callaway wrapped its second season under Josh King by improving its win total, win percentage, and region standings from year one. The Cavaliers also enjoyed their first playoff victory since 2017 when they trounced Walker 17-1 in the opening game of the super regional.