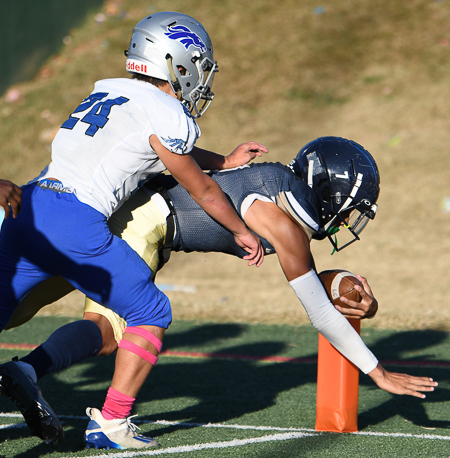 Long Cane weather a second half rally by Gardner Newman to book its ticket to the WGSMAL championship game with 18-7 victory.

“We played as hard as we could,” Long Cane coach Bryan Wallace said. “The kids gave us all that we could ask of them, and we got the win, but we got one more to go.”

The game was dominated by Davis Moncus, who scored a rushing touchdown and passing touchdown while churning out well over 100 yards with his legs.

“He’s our leader,” Wallace said. “Unquestionably, he’s the leader of this football team. Where he goes, the team goes.”

The first quarter was a bit of a stalemate, but the Mustangs were able to get the ball deep inside Cougar territory only to have Braylen Gray come away with the football on a fumble recovery.

The deadlock was broken when Moncus connected with Spencer Cohen on an eight-yard touchdown strike with less than 10 seconds to go in the first half. It was not the first time they connected on the drive as Cohen made a beautiful high-point catch earlier on the drive to get the Cougars in the red zone.

The Mustangs came out rumbling to start the second half. A 65-yard touchdown run by Javier Easter on the first possession of the second half sparked the game to life. The extra point gave the Mustangs their first lead of the game.

The Cougars had the answer in the form of Davis Moncus. He rattled off four carries for 60 yards, including a 10-yard touchdown run where he fought through a couple defenders and dove for the pylon.

“They have answered the bell all year,” Wallace said. “They are doing everything we ask of them, and the hard work is paying off.”

Javarris Warner put the game just about out of reach with a 60-yard touchdown run late in the fourth quarter.

A Cohen interception on the ensuing drive iced the game for the Cougars.

Long Cane will play the winner of Cowan Road, and Callaway who play on Thursday at 5:30 p.m.

“They are ready to play again right now,” Wallace said.