Callaway dominates Greenville in opening game of the season 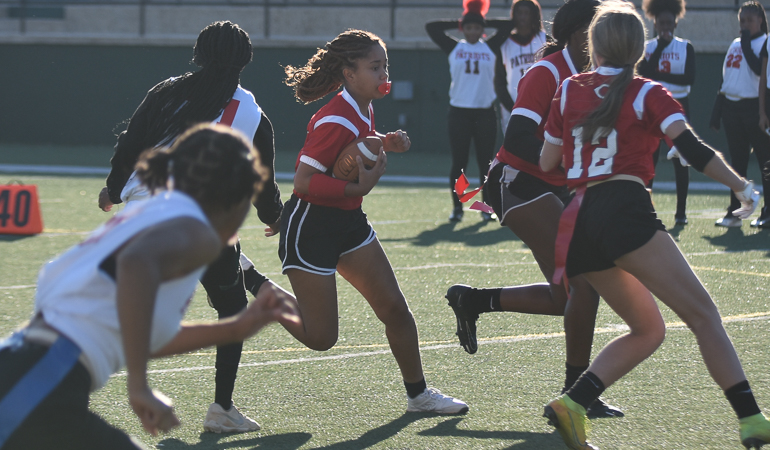 Callaway blasted Greenville 26-0 to kick off its 2022 season. The Cavaliers made light work of their opponents in Callaway Stadium with offense and defense dominating in both phases of the game.

“My three linebackers played softball yesterday and have had no practice,” Callaway coach Eric Woods said. “They had interceptions and Mac Rhodes had a ton of flag pulls for a loss.”

Rhodes was one of those softball players that got right back to work on Thursday. Another one of those was last year’s team MVP Ava Shuford, who was excellent in her first game back on the gridiron.

Mya Lawton opened the scoring with a pick-six, and it was all Cavaliers from there.

Madison Kemp and Mary Kate Baswell split time at quarterback and both feasted on the Greenville defense.

“Both of them can throw it well and run it well, and Mac Rhodes can play quarterback too,” Woods said.

The Cavaliers had a combined three touchdown passes in the game.

“We know with Lacy Thomas and Constance at wide receiver we can out run everybody else,” Woods said.

The flag football team has made tremendous strides from year one to year two this year. Callaway has nearly doubled the turnout this year.

“We haven’t expanded the playbook completely yet,” Woods said. “ We have a ways to go, but I’m cautiously optimistic this year.”

Callaway will take on Shaw and Harris County next Tuesday on the road to Harris County. The Cavaliers kick off the 2022 campaign a clean 1-0.