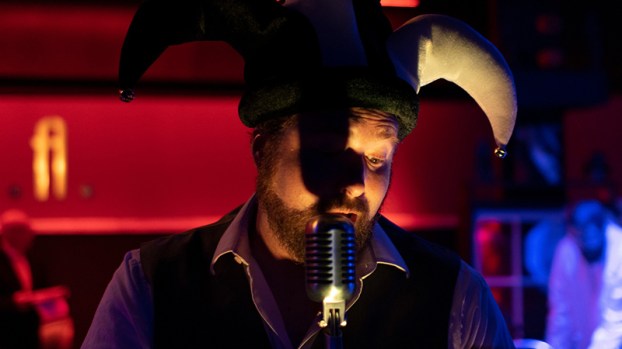 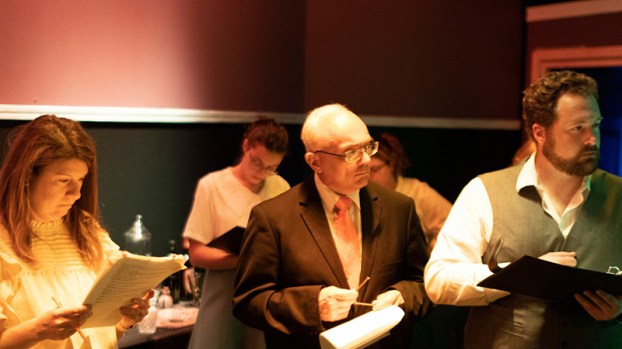 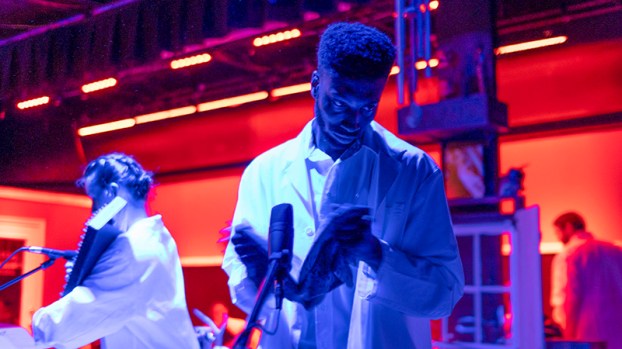 The Lafayette Society of Performing Arts (LSPA) production, “Twisted Tales of Poe,” will make its chilling arrival on Oct. 20. According to director Randy Powell, this play is something different and is sure to keep audiences on the edge of their seats.

Similar to Orson Wells’ “War of the Worlds,” “Twisted Tales of Poe” is radio-style play that allows the audience to see the production as it’s happening.

Powell said nothing in the show comes from a computer, and there are no prerecorded sounds.

“Every last sound that you hear is created on the stage, even the music,” Powell said. “I, along with our keyboardist Adam Thornton, composed the music. Thornton plays every last bit of music live on the stage while our actors in various moments will approach the microphones and tell stories from Edgar Allan Poe.”

The story centers around four prisoners who are awaiting execution for their various crimes. As they await their turn with destiny, they each tell their story. The first act starts with “Tell Tale Heart” and leads into the “Cask of Amontillado.” The second act picks up with “The Raven” and concludes with the tale of “The Black Cat.”

Powell said the most important thing for the audience to remember is that it’s an audio play.

“You won’t see actors running around and acting out the scenes. You act out the scenes in your mind the same way that you would for a radio production,” Powell said. “But I provide lots of cool visuals for the audience. You’re not just going to sit watching people tell stories. I’ve got lighting cues that people have probably never seen in our theater before and lots of fun things in store to keep it from just being audio.”

This will be Talley’s seventh show with the LaFayette Theater Company (LTC), some of her prior roles being Rizzo in “Grease,” April in “Company” and Annelle in “Steel Magnolias.”

Strother is a bit of an introvert but looks forward to making some noise onstage for his first attempt at theater. He has been a journalist for more than a decade and has spent years in nonprofit fundraising.

McDow has been doing theater for over 10 years. Her most recent role was Corie in “Barefoot in the Park” at New Horizons Community Theater.

Thornton is excited to return to the Lafayette Theatre Theater (LTC) stage in their production of the “Twisted Tales of Poe.” He has previously played Shrek in Carroll County Community Theater’s “Shrek the Musical,” Robert in LTC’s “Shadowlands,” and Randy/Jimmy in LTC’s “Almost Maine.”

Breed is a Swedish singer and the current vocalist for Project Arcadia and the former vocalist for heavy metal bands Bloodbound, Serious Black, Tad Morose and Trail of Murder.

“Twisted Tales of Poe” will be his first production with LTC.

Morvay is thrilled to be a part of this production and is continually amazed at the talented people that bring LSPA productions to life.

“Twisted Tales of Poe” will be Dye’s sixth show with LTC. He sincerely hopes audiences will enjoy the chills and thrills this production will bring.

Cummings feels it is amazing to be a part of this show. She thanked Powell for the opportunity and everyone for supporting LSPA.

Wills is excited about her first experience on the LSPA stage. She has a culinary background in pastries and now shares her love of fashion as the manager of The Mint Julep Boutique in Auburn.

Finley has enjoyed telling these tales with such a phenomenal cast and crew. She is excited to bring her character to the stage and would like to remember Helen McCrory for her inspiration.

Bagley is a native of Chicago and has been a resident of West Georgia for 52 years. He has been acting on stage since he was five years old and has most recently been seen in “Shadowlands” and “The Nerd” with LTC.

Savanna is a 2021 graduate of LaGrange College with her Bachelor’s in Theater Arts Performance and minor in Musical and Technical Theater. “Twisted Tales of Poe” will be her fifth production here at the LSPA, and she is excited to be back onstage for this show.

Kelton is a 2019 graduate with his Bachelor’s in Music. He recently graduated from Berkley College of Music in 2021 with his Masters in Music Production. “Twisted Tales of Poe” will be Kelton’s first show at LSPA and couldn’t be more thrilled.

“Audiences can expect thrills and chills and a little bit of humor because you can’t do horror whether it’s a film or a book without comedy,” Powell said. “People don’t really relate the two, but horror and comedy go together hand-in-hand. My goal is to get people squirming in their seats as much as I can before I give them a little bit of relief.”

Powell said people who attend the show will not be disappointed. The show will have times when it will go dark and tickets are selling fast.

“Twist Tales of Poe” will make its debut on Oct. 20 and will continue until Oct. 23. For show times and to buy tickets, visit www.lsparts.org.