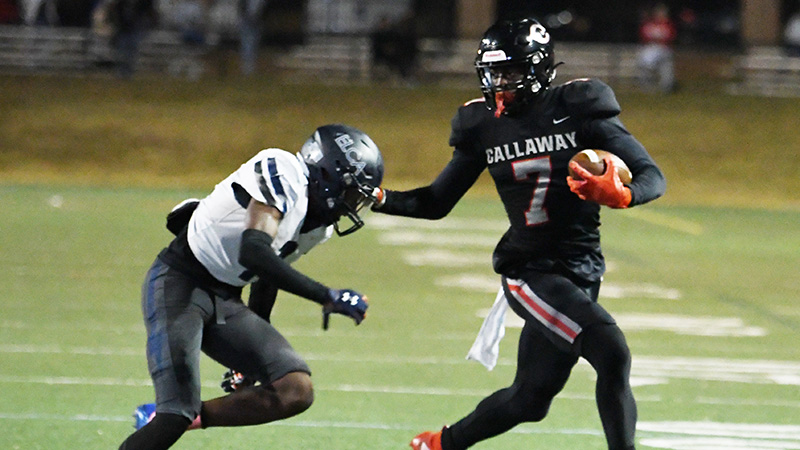 No. 10 Callaway showed up to play on Friday night as the Cavaliers smacked no. 7 Eagle’s Landing Christian Academy 49-20.

“It’s a huge win,” Callaway coach Pete Wiggins said. “It’s been a tough season. We started off playing some really talented football teams, and our guys kept believing in what we do.”

After starting the season 0-3, the Cavaliers have rattled off five straight wins and are poised to claim the region title once again with a win next week.

“I was seeing green grass out there,” Whitfield said. “I got to give credit to the OL (offensive line) who opened up some big holes for me.”

Whitfield was churning out yards on the ground all game, but his impact goes beyond the statsheet.

“He’s confident, and he’s a leader on our team,” Wiggins said. “He doesn’t say a lot, but he leads by example. He gets better each week and grows in confidence each week.”

The Cavaliers set the tone for the game early. Korey Jackson took the opening kickoff to the 12-yard line and two straight runs by Whitfield got the Cavaliers into the end zone with under a minute off the clock.

“Korey hit the whole just like we practiced and gave us momentum and good field position right out of the gate,” Wiggins said.

Whitfield got his third touchdown of the first half when he plunged over the goal line from five yards out a little over halfway through the second quarter.

The Chargers answered with a touchdown pass on the last play of the first half and doubled up by taking the opening possession of the third quarter down the field to cut the Cavaliers lead to 28-13. On the ensuing Cavalier possession, the Chargers got an interception and looked like they might have snatched momentum away as they marched down the field.

Senior Karmelo Burton answered the bell and jumped in front of a wide receiver to intercept the ball at the Cavalier 15-yard line.

“Karmelo Burton gets better each week and what a play he made on the ball,” Wiggins said. “They had some momentum and were driving, so that play put us back in the driver’s seat. We tell our guys when you look back on a game there are seven or eight plays that decide it and that was one of them tonight.”

Whitfield went back to business after the interception and finished the drive with a 17-yard touchdown for his fifth of the day with 2:08 left in the third quarter.

“It feels good, but it’s all about the team,” Whitfield said. “My senior year is going good now.”

The Cavaliers improve to 5-3 overall and 4-0 in region play. A win against McNair on Friday night next week would secure the region crown for Callaway.