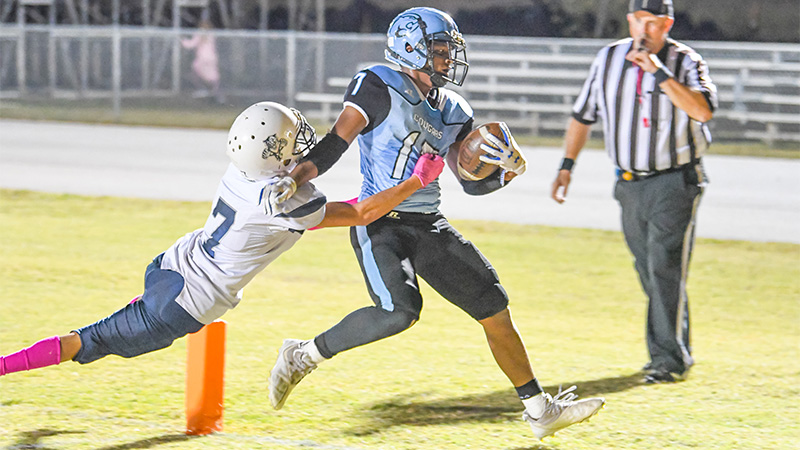 It is put and or shut up time for the Lafayette Christian Cougars on Friday night. The team in blue and black will be taking on Johnson Ferry with a loss putting either team on the brink of playoff elimination.

A win for the Cougars on Friday night could very well set up a date for the region crown against Unity on Nov. 4. For now, the Cougars are taking it week by week.

The Saints come into the game with a 2-5 record overall and an 0-2 region record. The Saints have dropped their last four games with their closest loss coming last week in a 49-42 loss to Horizon Christian Academy.

“Their most athletic guy is their quarterback,” Pike said. “We are going to have to contain him and keep him from getting outside. If we can keep their run game bottled up and not let them get outside we should be fine.”

On the flipside, the Cougars will be looking to establish the run like they have all season. Ephraim Snyder is the key piece of the puzzle in the running department. Snyder led the Cougars with 128 rushing yards and four touchdowns last week against Hearts Academy. Snyder is seeing more reps on the defensive side of the ball and backup Alex Tusing is out for the season, so the Cougars have looked to freshman Brandon Davenport. Davenport was able to churn out 22 yards and a rushing touchdown last time out versus Hearts Academy.

“I’ve been happy with how he’s been playing,” Pike said. “There are still some things to work through, but he’s been get better as the season goes along.”

The passing game has worked as a nice balance to the running game. Starting quarterback Andrew Hough commands the huddle while also being able to throw a delicate deep ball. Hough had 116 yards passing with a touchdown while also adding 19 yards on the ground against Hearts Academy.

“We’re still working out some things on offense and moving some people around,” Pike said. “We are working on a few different packages.”

Despite dealing with turnover on defense with injuries and suspensions plaguing the Cougars, they were able to put in a stellar performance against Hearts Academy last time out. The Cougars limited Hearts to just 16 points scored in the game with one of the touchdowns coming in garbage time after the Cougars had cleared the bench.

“We have to keep them focused, keep them positive and keep them motivated,” Pike said. “Basically, we control our own destiny, and that’s what I keep telling them.”

The game is set to kick off at 7:30 p.m. on Friday at Lafayette Christian School.