Top-10 matchup: Callaway and Eagle’s Landing are set for a region altering duel 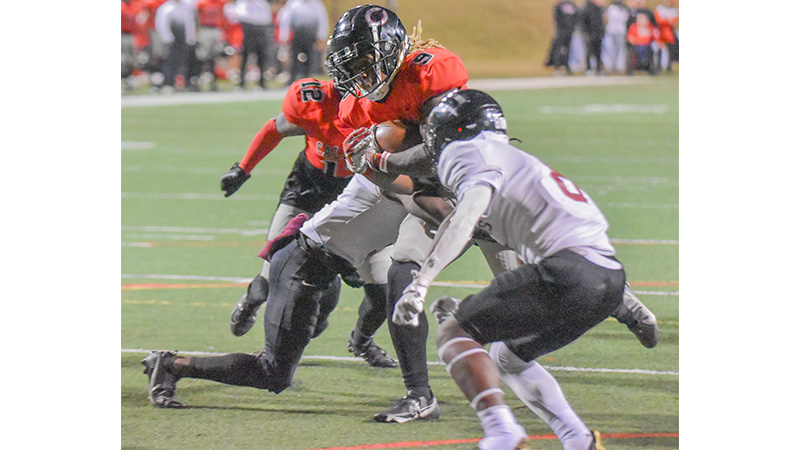 Friday will be a meeting of heavyweights in Callaway Stadium as no. 10 Callaway hosts no. 7 Eagle’s Landing Christian Academy. With the way that region 5-AA is shaking out, this game will likely decide which team will claim the region crown.

“Our guys have worked hard and played a tough schedule,” Callaway coach Pete Wiggins said. “We are looking for a big atmosphere, but also a high level of execution and we have to do that to have success. We are playing a really good football team on Friday.”

The Chargers are coming off a season in which they finished in the semifinals of the single A private school playoffs in which they lost to eventual state champions Trinity Christian in the second overtime. Now, Eagle’s Landing has moved its way up to the AA classification. The Charges, like Callaway, enter the game 4-3 overall and 3-0 in region play. The Chargers made light work of its first two games in region play against Landmark Christian and Redan before being tested last week against Columbia. The Chargers fell behind 25-21 late in the fourth quarter before a 60-yard kick return for a touchdown with roughly a minute on the clock to give themselves a 27-25 lead late.

“Eagle’s Landing is very explosive offensively,” Wiggins said. “Their quarterback Charlie Gilliam is committed to Wake Forest and he has a lot of weapons around him. Colton Hood and RJ Johnson both have power five (conference) offers.”

Callaway was able to defeat Columbia 32-12 earlier this season. Columbia had been ranked in the top-10 in AA on multiple occasions this year.

Callaway is riding high after annihilating Towers last week 57-6. The Cavaliers were able to escape the game mostly healthy while getting some young players some valuable reps.

“It’s very important to have our team healthy as we enter big ball games,” Wiggins said. “The more experience and the more guys that have lots of reps on the field, the better we should be.”

The young guns got their chance last week, but the established guard set the tone for the game early. Starting quarterback DeShun Coleman has been growing with confidence each week. He threw for 53 yards and a touchdown while registering 77 yards rushing with two touchdowns.

“I think that DeShun has become more confident as the season has gone on,” Wiggins said. “We’ve played some really good teams to start our season and I think that helped him with his growth.”

Coleman’s connection with Exavious Reed is a big part of the offensive game plan for Callaway. This was the second straight week the two connected on a touchdown.

Another player that has grown more confident as the season goes on is starting running back Quay Whitfield. After rattling off 200 yards and four touchdowns in the Cavaliers critical win over Columbia two weeks ago, Whitfield once again brought the hammer out of the backfield last week against Towers. Despite getting limited reps, he was still able to generate 63 rushing yards and a touchdown on just five carries.

“As he has matured as a person and a player, his leadership has grown to be at the top of our team,” Wiggins said. “He’s in the huddle patting guys on the helmet. He’s a very positive guy and his leadership and physicality is a big part of our success.”

Callaway has a long history of quality running back play and Whitfield is another jewel in Callaway’s crown. King is the other explosive running back for the Cavaliers and he was outstanding once again last week versus Towers. King carried the ball just three times, but was able to produce 56 yards and two rushing touchdowns.

The atmosphere in Callaway Stadium should be eclectic for what is essentially a region championship game. The winner of Friday’s game will be able to seal the region title with a win the following week.

“We need all of our community to be there to support our players,” Wiggins said. “We need those red and black shirts in the stands and it’s such a big part of the feeling of the game.”