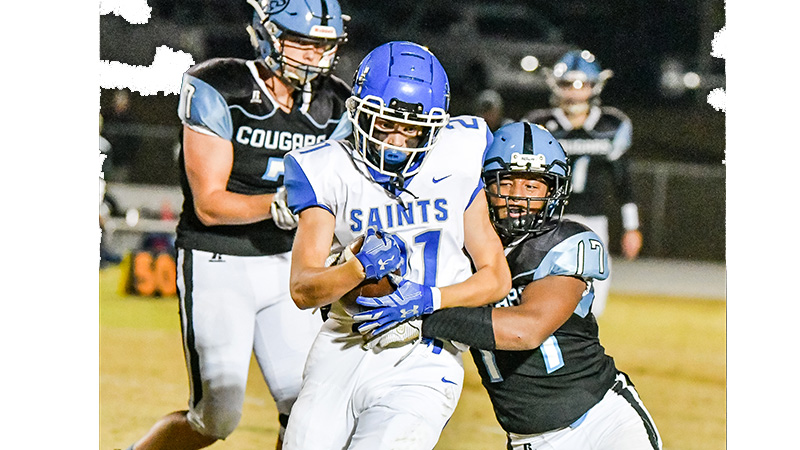 Lafayette Christian had to have a win on Friday to preserve its playoff hopes and the Cougars responded with a 54-12 drubbing of Johnson Ferry on Friday night.

“We have been struggling through the first quarter a lot this season but came out in the first tonight strong,” Cougar coach Jared Pike said. “We kept our foot on the gas from there.”

Bradon Davenport opened the scoring for the Cougars with a 22-yard touchdown run with 9:38 left in the first quarter. Davenport has had to step up in the absence of Alex Tusing and was instrumental in the run game against Johnson Ferry. He had his best game of the season with 105 yards on the ground to go along with his rushing touchdown.

The Cougars kept the momentum rolling when Andre Hough hit Braden Firth for a 65-yard touchdown pass. That connection was extremely important tonight as Firth was able to rack up 160 yards receiving while hauling in two touchdown catches in the game. Firth played a major role on defense as well, reeling in an interception and forcing a fumble.

“Braden had a great game on offense and defense,” Pike said. “He had a pick and was able to strip the ball and recover it.”

Johnson Ferry answered back with a 20-yard touchdown run in the closing minute of the first quarter, but it was all Cougars after that.

Andrew Hough scored on a 10-yard touchdown run before Synder added another touchdown a few minutes later to make it 26-6 Cougars. Hough hit Firth on a 45-yard touchdown strike on the final play of the first half to give the Cougars a commanding 34-6 lead at the break.

The Cougars got right back to work in the third quarter. Snyder scored on a 37-yard rushing touchdown with 6:53 left to go in the first half. Johnson Ferry answered back with a touchdown before Snyder scored his third touchdown of the night on a 32-yard run. Snyder was immense once again, going for 165 yards rushing and three touchdowns.

“Once again it was all about Ephraim,” Pike said. “It was taking them three to four guys to bring him down. He’s a tough runner and arguably the best running back in the league.”

Lafayette Christian was able to get some backups in the game late to get some valuable reps. Cal Evert scored the final points of the game when he scored on a 20-yard touchdown run in the fourth quarter.

While offenses make headlines, defenses grind out results. It has been the two straight weeks now that the Cougar defense has limited its opponents to under 20 points scored, which can be an extremely difficult task in eight-man football.

“I think we have been getting guys in the right spot, and everybody is flying to the ball,” Pike said. “We have guys that are wrapping up and making tackles right now.”

Lafayette Christian moves to 6-2 overall and 2-1 in region play on the season.

“This is a huge win, a must-win for us to stay in the hunt for the no. 1 seed in the region,” Pike said. “That was one of our best performances of the year.”

The Cougars will be on the road for the final time this season when they travel to take on Sherwood next Friday. Lafayette Christian will then be back at home in a critical region game against Unity on Nov. 4 that will have playoff and possible region title implications.