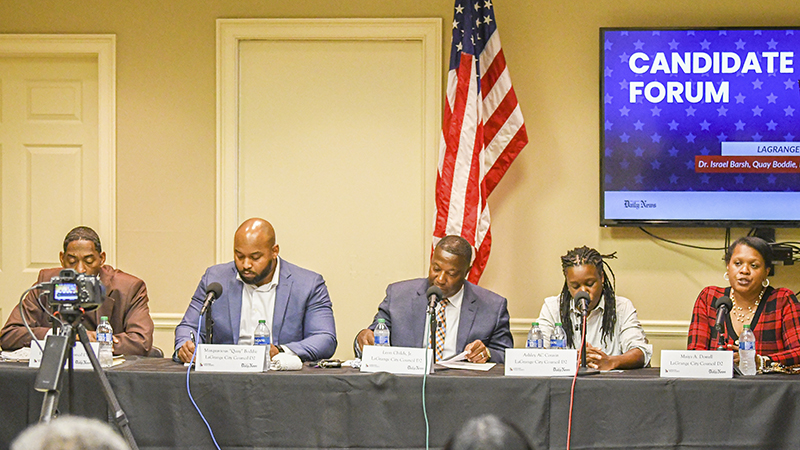 All five candidates to fill the LaGrange City Council District 2 seat vacated by LeGree McCamey faced off in a forum at the LaGrange-Troup County Chamber of Commerce on Thursday.

Israel Barsh, Quay Boddie, Leon Childs, Ashley Cousin and Maiya Dowell are vying the seat in a special election on Nov. 8. The candidates were questioned on attracting retail, the minimum wage, public participation in decision-making and infrastructure.

The full video can be viewed on www.lagrangenews.com or on The LaGrange Daily News Facebook page.

The candidates were asked how the city can help to attract retail and other business to the community.

“If you look in our district, especially District 2, there are a lot of eyesores,” Boddie said, noting that developers or businesses that want to come to LaGrange might not want to put their business in District 2 with the current blight.

Childs offered similar comments saying that business economics are rooted in the condition of the community. He added that education brings people to a community, which helps drive retail. He said crime, drugs and trash everywhere prevent retailers, developers and corporations from wanting to invest in a community.

Childs added that people also look at the school system when deciding to come to a community, so schools with bad ratings can impact economic conditions for retail.

Cousin said the community would have to come together to fix things in order to attract businesses.

“District 2 has been down for a long time,” Cousin said. “We need to fix a lot of things in District 2. We especially need to put our hearts into this. In order for us to change anything or get businesses down here, the community is going to have to come together.”

Dowell suggested holding landlords accountable to improve homes, which along with additional affordable housing, would help bring retail to District 2.

“We don’t have the housing or the living space, then the retailers won’t come to our district and bring those particular retail stores that we’re needing,” Dowell said.

Barsh suggested using resources that we already have to attract retail, such as the city’s Community Development Department, the chamber of commerce or his own company, LionsGates Coalition.

Barsh said LaGrange has five Fortune 500 companies and 200 non-profit organizations, so the resources are available.

Forum moderator Heather Graham cited a statistic saying the current living wage calculation in LaGrange for one adult without children is $15.78 per hour. She asked the candidates if they would support raising the minimum wage to $20 per hour as some cities have done.

All six candidates said they would support raising the minimum wage in some form.

Childs said LaGrange should increase the minimum wage not only because of inflation but because it’s the moral thing to do.

“I will not only bring legislation or bring it to the council to raise the minimum wage from the inflation point of view, but I will do it from a moral point of view,” Childs said.

Dowell said an increase to the minimum wage is definitely needed and cites previous struggles as a single mother.

Barsh said that we need to make sure that people in the community are making the funds that they need to live.

“The minimum wage does need to go up. We have to learn to change the time,” Boddie said. “Wages are going up in every other city and every other state. It needs to go up in LaGrange as well.”

The candidates were also asked how they plan to involve residents in decision-making processes.

Dowell said within each district there are boroughs and suggested that a few representatives of each borough could come to her with issues in their area and have an informal sit-down conversation on what’s important in their community.

Barsh said he has an opportunity to have a voice in decision-making in his role as a business owner but suggested that everyone should have similar social equity. He said the community could be more involved by being better informed and suggested creating a newsletter for his district.

Childs said his being involved with the community will help understand their concerns.

The candidates were also asked how they would evaluate whether a road or bridge project was worth implementing.

Dowell said she would look at how it would impact traffic and do a cost analysis to see if it is worth constructing. She said that alleviating traffic is important, but the cost is also important when making those decisions.

Barsh said the most important thing when dealing with roads and bridges is the residents in the community.

Boddie said LaGrange should continue maintaining infrastructure and building if it wants to keep up with other cities.

“We have to go ahead and make sure we build everything up to bring what’s needed to LaGrange because that’s what we all bark about all the time,” Boddie said. “‘We don’t have anything. There’s no bowling alley. There’s no this. There’s no that.’”

Childs said he would seek information from professionals.

“I would probably go to the city roads department, contractors, architects, just the people that know a little bit more about these categories than I do,” Childs said.

“There’s a lot of things that are out of my wheelhouse,” he said, adding that he would build relationships with those with proper expertise for their leadership on decisions.

Cousin said she would do similarly but also involve the community and ask them questions about what they want.

“I don’t want to put a bridge somewhere that nobody is comfortable with or cut off a road because we want you to go another way,” she said.

The election will be held on Nov. 8. Early voting has begun at the Troup County Government Center began and will continue through Nov. 4.