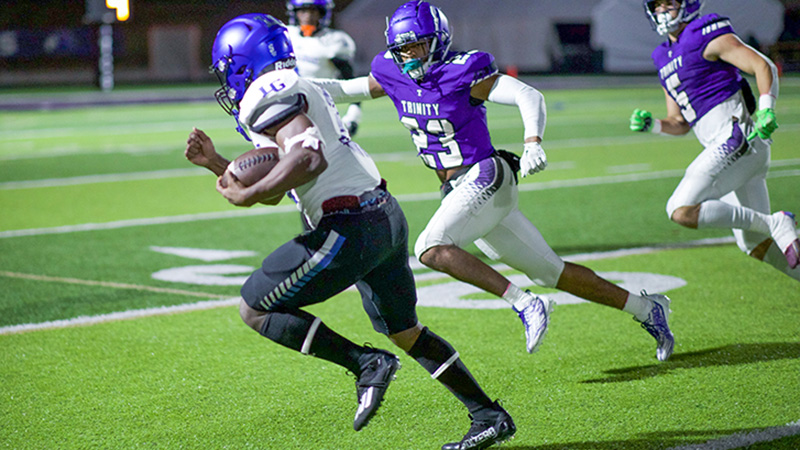 The LaGrange football team had its backs against the wall heading into a must-win game versus the no. 7 team in AAAA. The Grangers answered the call and then some as they trounced Trinity Christian 24-10 to pull out a season preserving win.

The Grangers were led by the dynamic duo of Jaylan Brown and Jaylon Jordan. Brown was a part of all three touchdowns for the Grangers while Jordan hauled in two 70+ yard touchdown receptions.

Marcus Jones helped set the tone for the Grangers early when he intercepted a pass on the first possession of the game for the Lions.

The teams were locked in a stalemate until a 20 play drive by the Lions ended in a field goal. The Lions took a 3-0 lead into the second quarter, but little did they know, the Grangers offense was about to spring to life.

Brown hit Jordan for a 88-yard touchdown pass to give the Grangers their first lead in the opening minutes of the second quarter. The two players connected again on a 70-plus yard touchdown reception later in the half as the Grangers snatched momentum away from the home team. Both touchdown drives in the first half lasted less than a minute for the Grangers.

The Lions struck back with a touchdown in the waning minutes of the first half to cut the Granger lead to four at the half.

It looked like the Grangers would put some breathing room between them and the Lions early in the third quarter when they drove the ball down inside the redzone. Unfortunately, a snap went over Brown’s head and the Grangers had to end up punting to end a once promising drive.

One of the plays of the game was an interception by Denorayon Reid with 4:44 left in the third quarter.

It was Brown that iced the game, however, with a monster 35-yard rushing touchdown with 9:42 left in the game to give the Grangers a double-digit lead.

The Grangers did a fabulous job of milking the last few minutes of the clock with the run game powered by AJ Tucker and Jonothan Keys.

A 24-yard field goal by Christian Ceja with under a minute was just the cherry on top of the sundae.

LaGrange keeps its playoff hopes alive with this victory. LaGrange is now 6-2 overall and 3-2 in region play. The Grangers control their own destiny and will punch their playoff ticket if they are able to win out. LaGrange will take on Fayette County at Callaway Stadium next Thursday.