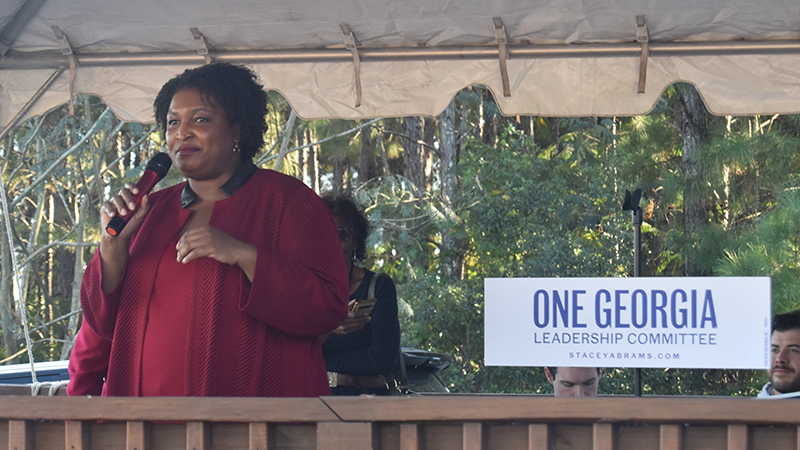 On Friday, Stacey Abrams visited LaGrange, campaigning at local eatery Rhodes Casual Dining. Abrams, the Democratic nominee for governor, gave a speech where she outlined her goals and explained why she should be elected over Republican governor Brian Kemp.

According to Abrams, under Kemp’s leadership there are approximately six hospitals shutting down in Atlanta.

She said if Medicare is expanded half a million Georgians will have access and be able to go to the hospital instead of urgent care.

“Medicaid is about making sure that we close the health insurance gap,” Abrams said. “The whole idea is that if people have access to insurance, they can make better choices and wouldn’t be living crisis to crisis, paycheck to paycheck.”

Under reproductive rights, Abrams said that she will defend the right for women to have a say over their own body. On her website, Abrams goes into detail on her plan for reproductive rights and pledges to promote prenatal healthcare for women and their families, protect doctors who serve families during pregnancy loss and increase the availability of emergency contraception.

“No man under the gold dome should tell a woman in the state of Georgia what she can do with her body,” Abrams said.

Under gun control, Abrams said under Kemp gun violence has gone up and gun laws have gotten weaker.

“Georgia has no waiting period to buy a gun or universal background checks,” Abrams said. “Because of his criminal carry law, we can no longer take one of the few background checks we had for concealed carry permits.”

She also said the problem with concealed carry is assuming people are going to do the right thing.

“We don’t live in a state where assumption works, Abrams said. “As Ronald Regan once said, ‘I believe in trust, but verify.’”