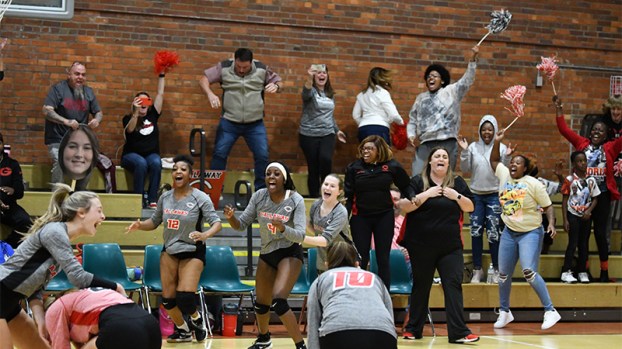 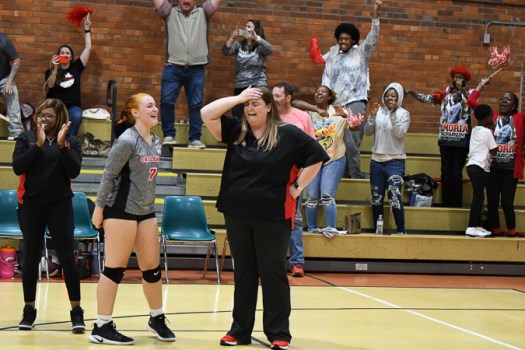 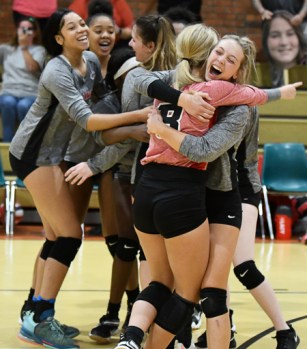 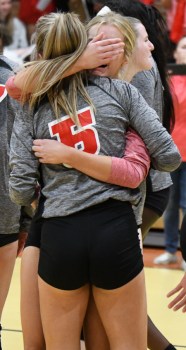 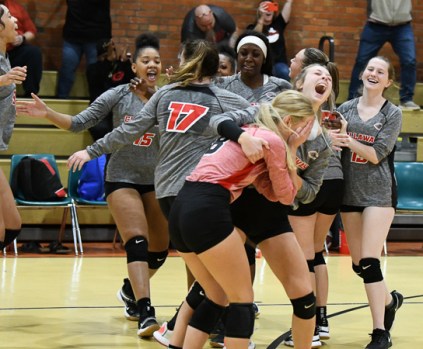 After cruising to victory in the opening two sets, it looked like Callaway was destined to win its AA state playoff round of 16 game against Davidson Fine Arts. When the Titans rallied to win the next two sets and take a 6-0 lead in the all-important fifth set tiebreak, hearts broke for those wearing red and black who made the three hour trek to Augusta.

“Sometimes the girls get in their own heads and get down on themselves, and they really play against themselves, but if they can push through that, there is nothing that can stop them,” Callaway coach Shelby Goins said.

Frustration set in during the fourth set as the Cavaliers were brushed aside 25-18 with the home fans getting on their feet and cheering. After the Titans went up in the fifth set, it looked like destiny would be denied. The Cavaliers proved masters of their own fate as they rallied to tie the set at 10-10, and then proceeded to score five straight points to head to the first quarterfinals in program history.

“We made history today,” Goins said, fighting back tears. “Callaway volleyball has never made it this far. We are really, really excited. The girls that are seniors were in state last as freshmen. It’s a cool full circle moment for them.”

With the score 14-10, a return from a Titan player hit the net and fell out of bounds to give the Cavaliers the win. At that point, the full gambit of human emotion overtook the Cavalier sideline. Laughter, cheers, screams, tears, grown men jumping out of their seats, the celebrations had everything and then some. It was a raucous occasion on 13th Street as an explosion of joy overwhelmed a home crowd that likely did not expect to see so much support make the journey to the east side of the state.

“I was crying, some of the girls were crying,” Goins said with a laugh. “We all know how hard we worked this season, and that final point was proof of how much we wanted this.”

The girls’ want and desire has been there for years, and they just needed the right motivator, mentor, strategy, leader, and confidence, and they got the full package in Goins. In just her first season in charge, she has put together the best season in program history.

It did not come together overnight. Goins, who had previously only served as an assistant coach for a lone season over five years ago, felt a bit overwhelmed at first.

“I texted the girls this morning that after that first practice in August I was like ‘what did I get into?’” Goins said.

Trepidation quickly turned into composure as Goins expertly navigated the treacherous waters of being a first year coach to enliven the Cavalier volleyball program with a new sense of pride and purpose.

How it got the fifth set:

Callaway and Davidson threw punches and counter punches in the first set. It was the Cavaliers who were able to grab an early one-set lead with a narrow 25-23 first set victory.

The second set went even better for the Cavaliers, who clinically handled the Titans 25-19 to move within a single set of victory.

“I think this is the best that they have played all season,” Goins said. “We talked on the way here about playing up and not playing down.”

The third set proved to be super competitive, but the Cavaliers were not able to pull it out of the fire and close the deal. The fourth set was tough to watch for the away fans as Callaway struggled to find any rhythm and regularly trailed by double digits until the Titans closed it out 25-18.

The fifth set rally after a disastrous start to the set shows what the current era of Callaway volleyball is all about.

“They are resilient,” Goins said. “They came in here really confident. The girls really believe in themselves right now.”

Callaway will be back on the court on Wednesday at 5:30 p.m. to take on Mount Paran Christian School. The Cavaliers will be earning the title of road warriors as this will be the third straight playoff game away from home this season.