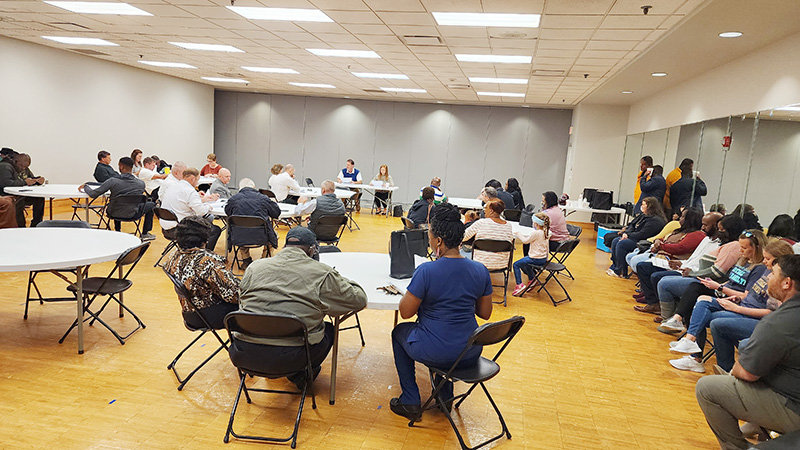 A large crowd filled a room at the Mike Daniel Recreation Center Monday as the Troup County Parks and Recreation Board discussed the Long Cane Middle School football team and damage to a table that occurred last week.

Ultimately, the board unanimously voted to allow Long Cane Middle School to use Callaway Stadium, opening the door for the team to get ready for its Wednesday night showdown against Cowan Road Middle School.

However, the parks and recreation board has no authority over Troup County School System decisions, and Parks and Recreation Director Lance Dennis made that clear before and during the meeting.  Therefore, the situation with LCMS Coach Dustin Ward was not directly discussed by the board.

Ward was relieved of his coaching duties after a table at the stadium was damaged following a LCMS victory last week. Video posted on social media shows players hitting a table with a baseball bat and chanting family in celebration.

Ward was publicly reprimanded in a letter written by Long Cane Middle School Principal Whitney Glisson on Friday. The letter went to all parents of students at LCMS, though it went out unintentionally, per a later press release from the school system.

LCMS was attempting to send out a press release on a pellet gun found at LCMS Friday when the letter was sent out instead.

“What was done was not done maliciously, it was in celebration … We are a family,” said Charles Mosley, who also coaches at Long Cane. “Any of you who played sports such as football, the only way to get to this point is to have the support of your teammate and coaches.”

Mosley said it was important for everyone at the meeting to remember that the student athletes at LCMS still need support.

“None of this has anything to do with those kids,” he said, speaking before the vote. “To not allow them to use Callaway Stadium or be in the locker room would be an injustice to them.”

The Rev. Michael Jackson said Ward will likely be in the stands Wednesday night.

A table, spray painted with the word “family,” sat on the LCMS football field Monday morning. A baseball bat was propped against the table.