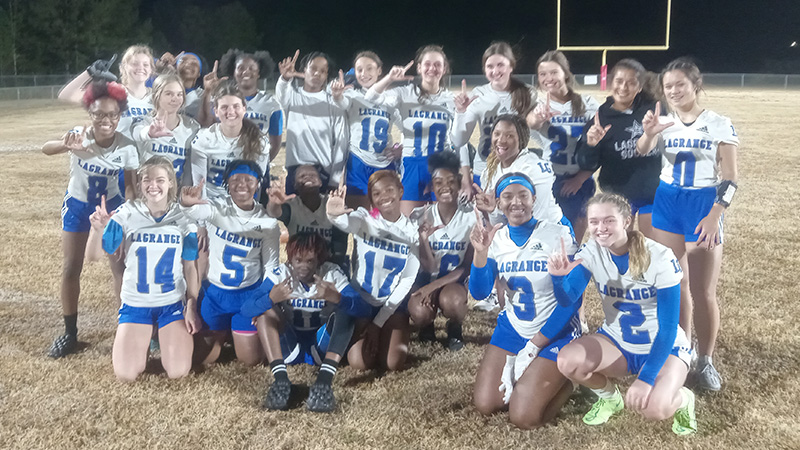 That is how the LaGrange flag football team has started the 2022 season after blowing out Greenville on the road 30-0 Tuesday night..

“It’s pretty amazing. We have a super athletic group of girls,” Granger coach Jim Reed said. “They come out here and have a good time and are relaxed and are just playing, but they take this seriously.”

The players could be heard multiple times trying to predict the play pre-snap based on movement and cadence from the quarterback. The evolution of flag football is just getting started and progress was on full display.

“Seeing them pay attention to details is fun,” Reed said. “It excites me because it lets me know they want to be successful, and they are locked in and focused on it.”

One player that excites every time she touches the turf is senior quarterback Corriah Williams, who threw three touchdowns to make it six passing touchdowns in just two games this season.

“She does a great job of being coachable and listening,” Reed said. “If she makes a mistake, she’s willing to come over and take the criticism and make the changes she has to make. On top of that, she’s a really good athlete.”

Ta’Niya Taylor was everywhere for the Grangers. She was consistently in the backfield pulling flags and and started the scoring with a sack that resulted in a safety. Sam Cottle got the offense rolling with a rushing touchdown. Cottle scored her third touchdown of the season with the other two being receiving touchdowns.

Williams connected with Tatiana Dudley on their first of three touchdown passes in the game later in the first half.

Roland has also been one of the team’s standout players so far this season. She is tied for second on the team in total touchdowns (3) and dominated the Greenville defense with her ability to get behind the safeties.

The Grangers took a 16-0 lead into the break and came out on the other end rolling. Williams hit Roland with another bomb before silencing the home crowd with a late touchdown throw and catch to the corner of the endzone.

LaGrange is 2-0 and rolling to start the season after dominating Jordan 25-0 in the opening game of the season.

“We’ll find out how good we are when we get into the meat of our season,” Reed said. “Their are teams on our schedule that have had teams for multiple years and have experience and coaches that know exactly what to expect on game days.  We will be running into some stiffer competition down the road, and we’ll see how we stack up against them, but we are very athletic and the girls do a very good job executing.