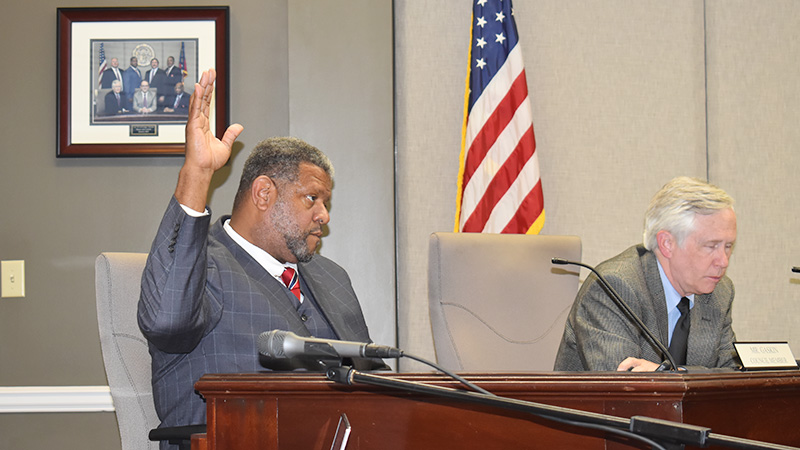 The City of LaGrange approved two intergovernmental agreements at Tuesday night’s council meeting, but one councilman voted in opposition as one way to try to get a suspended middle school football coach back on the field Wednesday night.

The agreements were approved 4-1 to upgrade an existing water main for the new Oakfuskee Conversation Center and to extend gas service across the interstate for the new Rosemont Elementary School. However, during the work session Tuesday — which is held earlier in the day — councilman Nathan Gaskin had tried to make a motion to table both discussions until Long Cane Middle School Football Coach Dustin Ward was back on the football field.

Ward is not coaching the LCMS football team after video emerged where a player was handed a baseball bat and a table was damaged during a recent celebration at Callaway Stadium. The city council does not have any oversight over the Troup County School System, including personnel issues at TCSS. Ward was relieved of his coaching duties by TCSS after video of the incident surfaced.

Mayor Jim Thornton told Gaskin any motions would need to wait for the regular council meeting, as is regular procedure.

Later in the work session, Gaskin again brought up the issue of Ward and asked the council to join him in delaying the agreement with the school board.

Thornton responded that delaying the vote over a political issue is counterproductive.

“We sell gas. We sell water. That’s what we do. That’s what generates the revenue that pays for everything,” Thornton said. “That’s our main source of revenue is the sale of water, gas, electricity. So, it seems counterproductive to do something for political reasons or make a political statement that actually negatively affects the revenue stream of the city.”

“I’m not willing to make that sacrifice, for a few more coins in the pot. I need him on the field. I need him in front of those young kids. I need him to be a part of their life,” Gaskin said.

Later Tuesday evening, at the regular council meeting, Gaskin again brought up Ward being removed as Long Cane football coach as a result of the table incident.

“Some in his family feel that it was repercussions for him being removed, not because of the table, but because of political statements that were made by some of these family members,” Gaskin said.

Gaskin reminded the council that the city had previously passed a memorandum of understanding that the city would not do business with those people who discriminated against people for their religious beliefs, sexual orientation or political views.

“If this is true, then we ourselves are in violation of our own memorandum of understanding,” Gaskin said.

However, both intergovernmental agreements passed, with Gaskin being the only vote against. He did not make a motion to table the agreements, as had been discussed during the work session.

The city has already contracted with Barge Design Solutions to design and engineer a replacement of the current 4-inch PVC pipe that extends from an existing 8-inch water line located near the Dollar General on Roanoke Rd. The line would be replaced with an 8-inch ductile iron water supply line to Pyne Road Park.

The replacement of the current pipes would provide greater water flow for safety needs for the conservation center, as well as address ongoing repair issues of the current aging PVC pipes.

“The Oakfuskee Center requires fire protection, and you can’t do fire protection with that small of a line,” LaGrange Utilities Director Patrick Bowie explained.

The county has already agreed to pay for the project, which the city would oversee. The city benefits from the project by potentially selling more water to the county. The city’s meter will be located at the entrance to the park, and then the county will own all of the pipes inside the park.

“We’ve been working hand in hand with the county on this project,” Bowie said. “We’ve already got the materials ordered. The county has been approving all of this along the way, but we wanted to codify this through an agreement.”

For the Rosemont agreement, Bowie said the school system has expressed interest in putting in natural gas at the new elementary school, instead of using more expensive propane. TCSS asked if the city would be to be able to extend a gas main to serve the new school to go along with the waterline to the school.

The investment would put the city in a position to gain new gas customers in the area as it grows because it is at the interstate, Bowie said.

Bowie said the work could be done with city crews. The project has budgeted $150,000 in materials with labor costs up to $150,000. Bowie said they project an 8 percent return on the investment in gas sales over a 20-year period.

The school board has not voted on the agreement, but Bowie said discussions were for them to contribute $125,000 to the project.