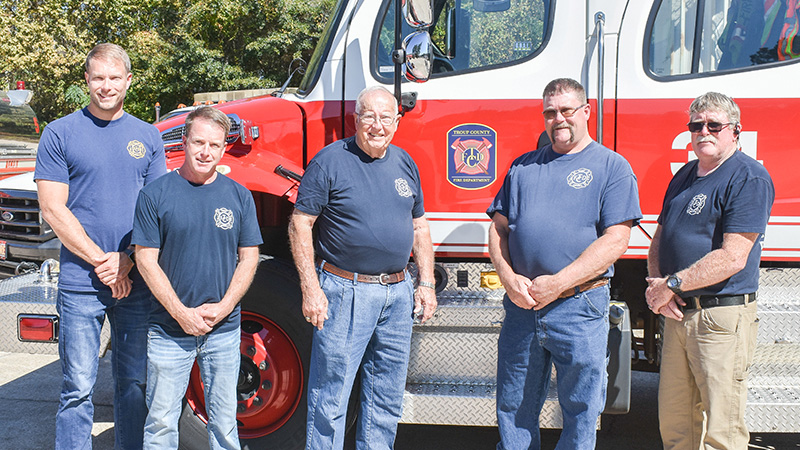 Troup County Commissioner Ellis Cadenhead has served as a volunteer firefighter for over 55 years. With four sons who also serve as firefighters, it must be in his blood.

Long before serving Troup County as a commissioner, Cadenhead began helping the community as a volunteer firefighter. September marked 55 years of service for the 78-year-old firefighter.

Commissioner Cadenhead and his sons, Jason, Jim, Ken and Roy all currently serve as firefighters in various capacities. Jim and Roy have made careers out of it, and Jason and Ken volunteer.

The commissioner himself even still volunteers and goes out to fires, but he doesn’t run into burning buildings anymore. Cadenhead serves as a water carrier and drives a tanker truck to fires out in the county where hydrants aren’t available. Ellis said he stopped going into houses around 10 years ago.

Ellis said his first endeavor into firefighting began when a friend’s house caught fire, and he joined in to help put it out. He said Henry Hogg’s house caught fire and burned down near Hunt Rd. and Hamilton Rd. in the Rosemont Community.

“They lost the house. We were there trying to help him put it out and that spurred the interest,” Cadenhead said, noting that LaGrange had a civil defense program at the time but the county didn’t.

Cadenhead and others then formed a Rosemont civil defense program, which started Rosemont Fire and Rescue.

“We really realized how badly we needed a fire truck, so the county bought a used 1946 International high-pressure truck that we used,” Ellis said. Cadenhead said he kept the truck at his house for several years until they finally got a station.

“We had a group of about 15 people at Rosemont at the time, and we used to do all sorts of things to help raise money just to be active,” Ellis said.

No one was paid back then, but the county did eventually agree to pay for gas for the firetruck, he said.

“Ken and I are just water carriers now,” Ellis said.

“We bring water to the paid firemen. That’s our biggest role right now for the volunteers. We still need more volunteers though.”

Ellis said that as volunteers, they’re on call.

“In the early days, we had postcards that were put around everywhere in the community with our phone number,” Ellis said. “My wife would then turn around and call all the other firefighters.”

“Back in the day, we’d have socials. One year New Year’s Eve, we had a call at midnight. We actually had a fire while we had a square dance going,” Ellis said. “So, we had to get up and we had to leave. When we got the call, we had to go.”

The fire department currently has 72 paid firefighters and 14 volunteers.

Once a volunteer becomes certified, they could potentially make a career out of it, he said.