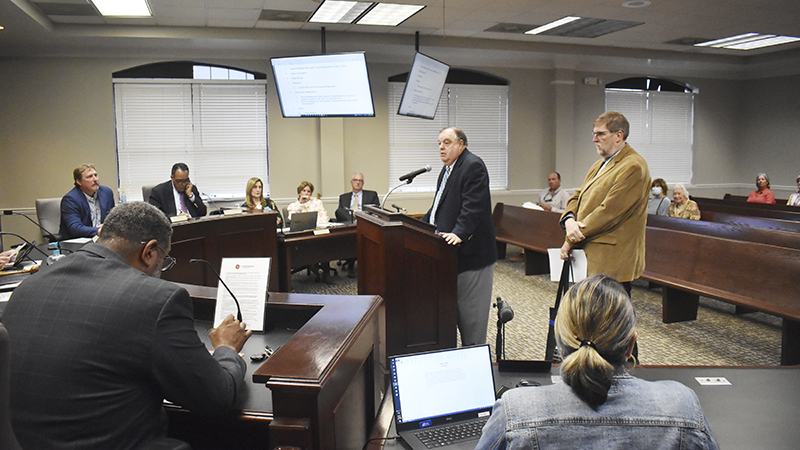 On Tuesday evening, the LaGrange City Council heard from Bill Stump, Chairman of the Troup County Board of Elections, and Elections Supervisor Andy Harper to discuss the mistake that was made on ballots for the upcoming election.

As previously reported, a mistake was made on local ballots where the special election to fill former District 2 Councilman LeGree McCamey’s seat was incorrectly designated as an at-large race, rather than a districted race. That means all voters in LaGrange —including District 1 voters— will see the option to vote for District 2 candidates.

Stump outlined the process for removing the ineligible votes.

“How can we assure our community that this process will be done fairly?” asked District 2 Councilman Willie Edmondson. “Because we’re thinking that if they can go in and pick and choose and pick out votes, that’s not supposed to be there, couldn’t they do that ordinarily on other races as well?”

Stump said that could theoretically happen but not practically. He said they don’t know the names of the voters for each ballot. They just know the district where they are eligible to vote, he said.

Stump said he had already been asked that question by a voter.

“A gentleman in our board meeting on Thursday, asked a very similar question, ‘You’re telling me now you can fix this,’” Stump said. “Well, there are different terms for fixing. We are going to identify those ballots cast from District 1. We will clearly identify those and eliminate them from that race.”

Councilman Nathan Gaskin also asked if Stump had contacted the State Attorney General to ensure that no one is prosecuted for incorrectly casting a District 2 vote from District 1.

“Can we get letters of immunity from the State Attorney General’s office saying that no one can be prosecuted?” Gaskin asked, saying that District 1 voters casting votes in the District 2 race could potentially be a crime.

Stump said that the votes will not be counted, so it should not be an issue, but he would contact the State attorney general to ask.

“I will request the letter, whether they write it or not I don’t know,” Stump said.

Gaskin also called for an investigation into the elections office, saying this is a second major mistake for District 2 and it has become a “lightning rod” for problems. He noted that when he first won his seat on the city council, he won because the other candidate was ineligible.

“Do you know how I got elected?” Gaskin asked Stump. “Somebody committed a crime, and he was removed from the ballot. The election office didn’t catch that either.”

Harper explained that in Gaskin’s previous election, his opponent had signed a sworn oath about where he lived in the district.

“That’s what we have to go by,” Harper explained. “Then it got brought to our attention, and that’s when our board had a hearing [to remove the candidate].

Stump assured the council that all eligible votes will be properly counted both electronically and by hand.

“We’re going to count the ballots, as we always do in public. We’ll do it again two weeks later,” Stump said, inviting anyone to come and watch the count.