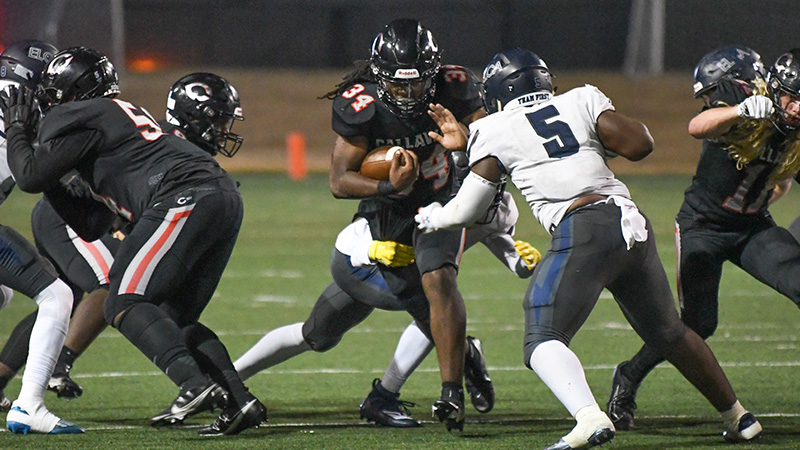 A region title is within the grasp of the no. 5 Callaway Cavaliers. After winning two region titles in a row from in 2019 and 2020, the Cavaliers narrowly missed out on a region title last season. The Cavaliers under Pete Wiggins rarely go long without a region title and they look like they will claim a third in four years as they take on McNair on Friday.

While McNair comes into the game with a 4-4 record and are 2-2 in region play, the Mustangs have been less than convincing. McNair has already suffered a 47-0 loss to Columbia — a team that the Cavaliers beat 32-12 earlier this season. The Mustangs are fighting for their playoff lives and will come out energized and focused. Currently, they sit in fifth place just outside of a playoff spot.

The Cavaliers come into this game in fine form and have risen to no. 5 in the AJC/GHSFD poll after falling out of the top-10 earlier this season. The surging Cavaliers have rattled off five straight wins after starting the season 0-3. Callaway has knocked one team out of the top-10 (Columbia) and beat no. 9 Eagle’s Landing in a dominant 42-20 showing last Friday at Callaway Stadium.

Unfortunately, the Cavalier faithful will have to make a trip to Atlanta to see if the Cavaliers offense explodes once again on Friday. Quay Whitfield has been the heartbeat of the offense and totaled 556 rushing yards and 11 rushing touchdowns over his last three games. The Cavaliers showed a new wrinkle in their offense last week with a wide receiver reverse involving Dylan Stephens. The senior was able to take just six carries for 91 yards last week against the Chargers.

Quarterback DeShun Coleman has been showing improvement each week and completed eight of his nine passing attempts last week for 136 yards. Exavious Reed has been his no. 1 target this season and the dynamic duo connected on three passes for 48 yards in last week’s game. Reed’s two-way dominance is a big key for the Cavaliers.

Treyonn Tucker showed some burst last week when he caught one pass for 59 yards to set up one of Whitfield’s six touchdowns against the Chargers last Friday.

The Cavaliers are riding a five game win streak while the Mustangs come in with two wins in a row. One team is fighting for a region championship, the other, a playoff berth. There will be a lot on the line Friday when the Cavaliers take the field in Atlanta. For the away fans making the trek, it might just be another memorable Friday night for Wiggins and his boys in red and black.