Showdown for a region crown: Troup is on the verge of first region title since 1987 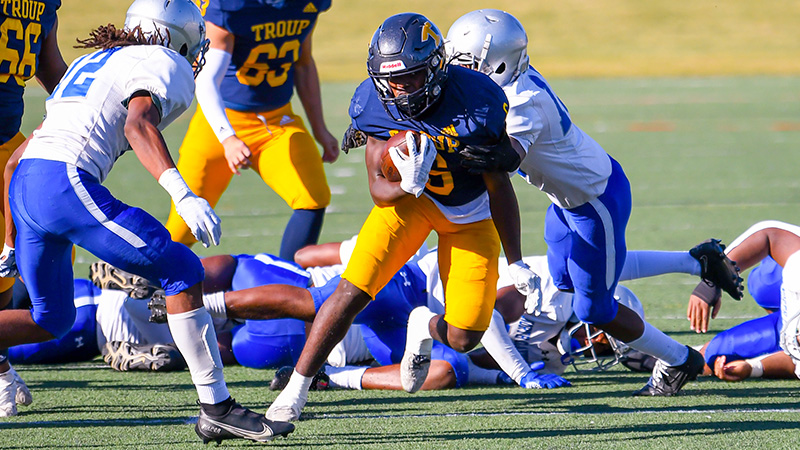 The first region title since 1987 is within the grasps of the no.4 Troup Tigers. The Tigers have been in this position before under coach Tanner Glisson, but Friday night has a different sort of pre-game feel to it.

“It’s a game that has big implications, but we are going into it treating it just like any other game,” coach Tanner Glisson said. “We have to let other results handle themselves and focus on us getting better and locking in. Focusing on one play at a time is crucial.”

The game will have a big game atmosphere to it as the Troup faithful piles into Callaway Stadium to one of the premium matchups of the season as the Tigers take on Trinity Christian.

While the Lions have fallen out of the top-10 after their 24-10 loss to LaGrange last week, they are still a dangerous opponent.

“We are expecting their best shot,” Glisson said. “Even though they lost last week they have everything in front of them to play for.”

The Lions come into the game 5-3 overall and 4-1 in region play. Trinity Christian is a private school and is playing in the AAAA classification for the first time this season. The strength of the Lions team is their defense that has allowed under 20 points per game on the season. The offense, on the other hand, has not always been firing on all cylinders. The offense is averaging just 22.8 points a game, which is in stark contrast to the 44.5 points per game that the Tiger offense is averaging.

The Tiger defense has been equally, if not more impressive, than the Lions, allowing just 15 points per game. Troup’s defense has allowed only one team to score more than 21 points this season. One of the main reasons for this is the dynamite four star duo of Qua Birdsong and Noah Dixon. Birdsong now has 26 tackles for a loss on the season and Dixon patrols the back end from his safety spot. A defensive player that has flown under the radar has been TJ Mitchell. The defensive back was stellar last week against Fayette County and totaled seven tackles, two tackles for a loss, and a sack

The Tigers have players that strike fear in the hearts of opposing players on offense as well. Taeo Todd is the no.1 player on the list as he has racked up 1,237 yards passing, 1,122 yards rushing, 16 rushing touchdowns and 14 passing touchdowns. He has been the linchpin of the Tigers offense this season.

It helps that Todd is surrounded by quality playmakers and none of them have shined quite as bright as Qua Moss, who caught three passes for 91 yards and a touchdown in last week’s win over Fayette County. Moss is the Tigers leading receiver and has 572 yards and seven receiving touchdowns on the year so far.

Javari Fannin and Tray Blackmon saw a heavy dose of the ball in last week’s win over Fayette County. Both players had over 75 yards on the ground and rushing touchdowns each.

If everything goes right for the Tigers on Friday night, it will be a joyous occasion. A loss will not eliminate them from winning the region title, but it would put them at the mercy of Trinity Christian who plays Fayette County (1-5 in region play) in the final week of the season. This will be the one of the most important games the Tigers have ever played in Callaway Stadium since Glisson took over as head coach.

“I think having it at home is a huge plus,” Glisson said. “The last two times that we’ve been in this position the games have been on the road at Carver-Columbus and Cartersville, so we are 0-2 in those scenarios, so it will be nice to have this in a packed house.”