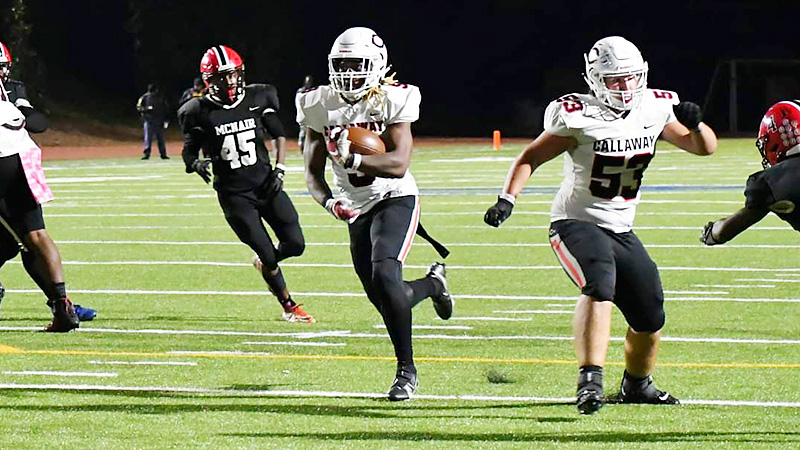 The Callaway Cavaliers laid claim to their 10th region title in program history with a mammoth 29-6 win over McNair on Friday night. Callaway winning the region title felt like a formality after last week’s dismantling of no. 9 Eagle’s Landing, but Friday night’s victory was sweet all the same.

Callaway took care of business like they always do, suffocating the life out of the game with a dominant running game and an ever more ferocious defense that flies to the ball.

The Cavaliers earned their crown, and it was in large part due to the performance of Jordan King on Friday night. He got the Cavaliers offense going with a four-yard touchdown run in the first quarter as Callaway led 7-0 after the opening frame.

Qua Whitfield wanted to get on the act, and he scored from nine yards out to give the Cavaliers a bit of a cushion in the second quarter. The lightning and thunder combination of King and Whitfield in the backfield has been essential for the Cavaliers offensive success so far this season.

King and Whitfield were back doing damage later in the second half as both registered their second rushing touchdowns of the game to put the Cavaliers up 28-6. Whitfield cannot be contained at the moment and has scored 13 rushing touchdowns in his last four games played.

The dynamite connection between junior quarterback DeShun Coleman and senior Exavious Reed was once again on full display Friday night. Coleman hit Reed on a 10-yard touchdown with under a minute to go in the first half to send the Cavaliers into the break up 35-6 and cruising to their third region title in four years.

Another senior tight end, Sam Williams, got in on the action to start the second half scoring by taking a catch short of the end zone across the goal line by bullying his way between a few McNair defenders for a 9-yard score.

Zae Hart hit McNair with the finisher when he waltzed into the end zone for six with 8:42 left on the clock.

After narrowly missing out on a region title last season, the Cavaliers reclaimed the crown this season. Callaway improved to 6-3 overall and is riding a six game win streak into the final game of the regular season. Callaway will play its final regular season game next week on the road at Landmark Christian before hosting a playoff game the following week at Callaway Stadium.