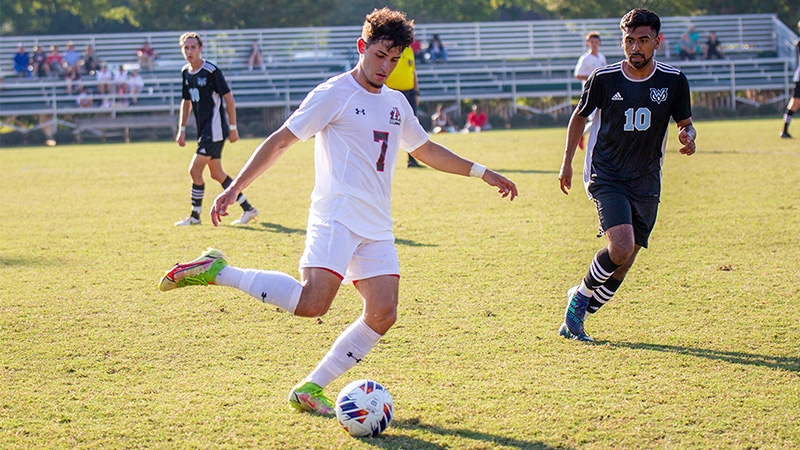 Over three years ago, Enrique Hernandez arrived at LaGrange College thinking that he would be a college basketball player. Little did he know that three years later he would win USA South conference player of the year in a sport he stopped playing when he was 12.

“I met some friends here on the soccer team, and they mean the world to me,” Hernandez said. “I love basketball still, but I fell back in love with soccer.”

Getting back on a soccer pitch was nerve racking for Hernandez at first, but once he found his sea legs during his freshman campaign he became an integral part of the team. Once he got used to playing and got comfortable with his teammates, trepidation turned to happiness.

After he left soccer when he was 12 years old, Hernandez was apathetic to the game. Even when he did play the game in his youth, he was never fully invested like he is now. Hernandez watches games on television now — something he did not do until he got to college — and analyzes strategy like never before. This sort of commitment has allowed for an explosion on offense this season. Before this season, Hernandez’s highest goal total was in 2021 with 11 and his highest assist total was three back in 2019. He has accumulated a whopping 20 goals and eight assists this season.

Hernandez is one of top goal scorers in the entirety of Division III this season.

“I just get in position to score,” Hernandez said. “It’s really about my teammates, who provide me service and help me do well.”

Hernandez latches on to the ball with the ability to play one-twos with his teammates and his blazing speed to get in behind the opponent’s defenses.

It hasn’t just been Hernandez that has been rejuvenated this season, the entire team has been firing on all cylinders. The Panthers just recently claimed the first conference title in program history, and Hernandez was a major factor in the team laying claim to such an honor.

“I understand I can score all these goals, but if we are not winning, what is the point?” Hernandez said. “I want to win, simple as that.”

“Winning the conference championship was the best feeling I’ve had in my four years here. I’ve never felt anything like it. I teared up after the game”

“Everything is clicking,” Hernandez said. “We’re not fighting like in years past. Everybody in the locker room loves each other. On the field, we protect each other. If somebody goes down we are all there to help him up together. It’s a special experience getting to play with these guys.”

Hernandez has another year of eligibility left and is 75% sure he is going to take it. He dreams of playing soccer at a higher level in the future but knows that nothing in sports is ever guaranteed. He wants to stay around sports regardless of where and how far his playing career takes him, which is why he is majoring in sports management.

It has been a strange and winding journey for Hernandez to end up a Panther soccer player. If he decided to take a different offer to play basketball, odds are, he would never have fallen back in love with the beautiful game. Now, Hernandez and the Panthers are gearing up for the playoffs.

“We didn’t make the playoffs the last two years and have made a lot of progress this season,” Hernandez said.