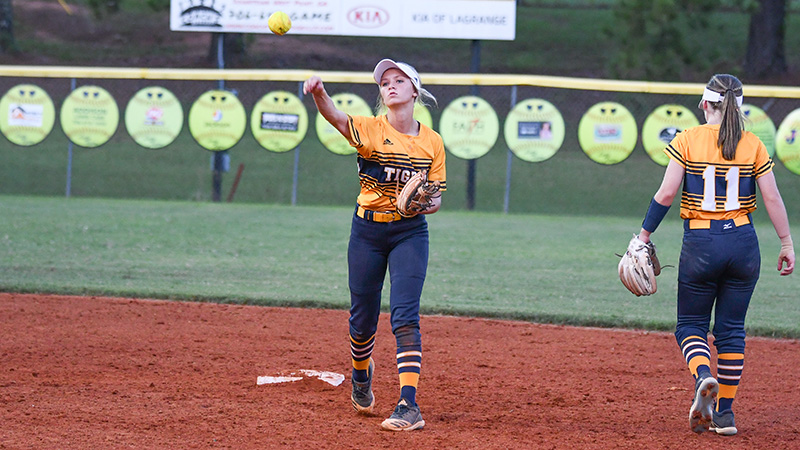 Ramsey Clark brings more than just raw talent to the softball diamond. The senior brings a wisdom beyond her years to the game and is equally as adept off the diamond as well. She is graduating a year early in May and is heading off to Southern Union to continue playing softball.

“It’s been a good senior year, but bittersweet because I’m graduating a year early,” Clark said. “I had enough credits to skip a grade. For the most part, I’ve been all in on it, but I have had doubts about it because of softball. I feel like I could go further if I didn’t skip a grade.”

Clark only suited up for Tigers for three years as she earned an early departure from Troup. It was not an easy decision as passing on playing with her Troup family for another season was a difficult decision to make.

While her Tigers career ended with three straight appearances in the sweet sixteen, her softball journey has not yet reached its conclusion. Southern Union is just a two-year college, but Clark plans to continue her academic career and possibly her softball career after her time at Southern Union comes to an end.

“I really wanted to go to a two year school, so I could see my options after two years and Southern Union has a really good nursing program,” Clark said. “I really want to go to Auburn, it’s always been my dream. My dad went to Auburn and our whole family are big Auburn fans.”

While her time as a Tiger is winding down, Clark will be remembered for her prowess on the diamond. While she was a great slap hitter, it was her ability to swipe bags that made her such a valuable asset for the Tigers softball team.

“My dad always taught me how to leave early without ever leaving too early,” Clark said.

Clark stole 26 bases in 2022  while the rest of her team combined for 35 with no individual swiping more than seven besides Clark. Combine that with the fact that she was only tagged out on two steal attempts, and it shows how difficult she will be to replace.

She was also a bunting savant as well as a player that used a step forward in the batter’s box to become a better slap hitter.

“My dad taught me how to slap as well,” Clark said. “My dad has taught me basically everything. That is basically the only coach I’ve had.”

Clark was indestructible this season and was one of only two Tigers to play in all 26 games in the 2022 season. She ended the season hitting .373 with 15 RBIs and a team leading 28 runs scored — eight more than the next highest Tiger.

It has been a long softball journey for Clark so far. While she flashed some rangy defense at shortstop, it is far from her most natural position.

“Outfield is definitely a favorite position of mine,” Clark said. “I wish I could play that more during school ball, but I was willing to play wherever they needed me at.”

While her time as a Tiger softball player has reached its inevitable conclusion, her time on the diamond is far from over, and most importantly, her time at Troup has shaped her into a young lady that is graduating a year early while still being able to continue her softball career at the collegiate level.

“Most of my best friends have come from softball,” Clark said. “Every person I hang out with outside of school has been softball related. Softball has helped me build friendships and learn a lot.”