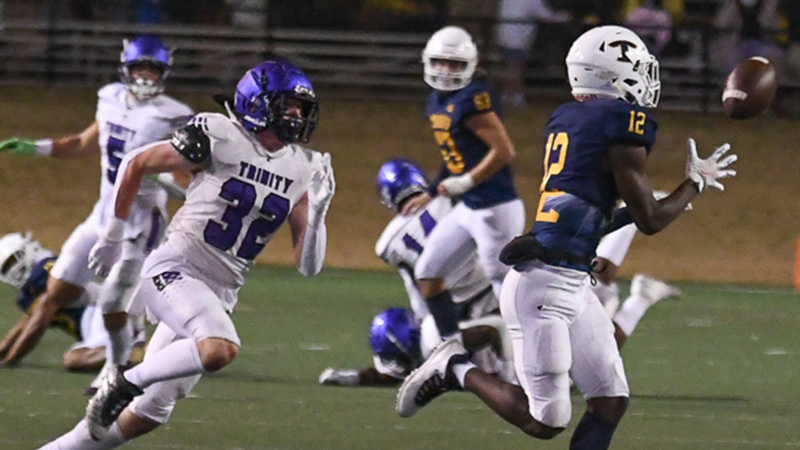 The simple fact is the Troup Tigers came into the season having gone 35 years without claiming a region title in football. The streak ended on Friday night with a 50-15 rout of Trinity Christian to produce the first region title since 1987 for the Tigers.

“It’s a great feeling, and these guys have been able to accomplish so much,” Coach Tanner Glisson said. “I’m proud for our fans. I’m proud for our school. That was a good football team we just played. They are tough, and that’s the way championship games are supposed to be.”

Championship games are typically hard fought like Friday nights clash but rarely are they as lopsided as the Tigers victory.

It was truly a magical night in Callaway Stadium as Glisson was treated to a Gatorade bath and had the Troup student section bum rush him on the field to celebrate the region title.

The Tigers showed every sign of poise and confidence you would expect from a contender in AAAA.

Troup stuck with lightning quick ferocity. Less than two minutes into the game, Javari Fannin scored and the Tigers converted on a two-point try to take an 8-0 lead. The Tigers quickly doubled it less than two minutes later when Taeo Todd hit Logan Sinkfield on the first of their two long touchdown passes on the night. This one was for 61 yards.

“Sinkfield was absolutely amazing tonight,” Glisson said. “He does so much for our football team.”

Todd scored his first rushing touchdown of the game halfway through the second quarter after the Lions scored a touchdown on a run by Phoenix Moss. Todd was back at it later in the first half when he scampered down the sideline for a 59-yard touchdown and gave the Tigers a 29-7 lead they would take into the break. The Tigers had a chance to add more in the first half after Maliki Poythress recovered a fumble on the ensuing kickoff, but a 50-plus yard touchdown strike from Todd to Moss was called off for an illegal procedure penalty.

“Our offensive line was amazing and gave Taeo Todd time to run the football and throw the football,” Glisson said. “We are really pleased with the offensive performance tonight.”

The Lions thought they were back in the game when they scored a touchdown and two-point conversion to make it 29-15 with 10:02 left in the game, but the Tigers earned their coffee by closing out the Lions in style.

“We knew the whole time that it would be a four quarter game,” Glisson said. “We were trying to put as many points on the board and not take any chances. We didn’t want to see the game slip out of our hands, so we had to keep the pedal to the metal, and we talked about that all week.”
Todd took a quarterback keeper for a 27-yard touchdown on fourth down with 6:25 left in the game to just about ice the game.

Moss was able to reel in an interception on the following Lions drive, which was promptly followed by a 87-yard touchdown connection between Todd and Sinkfield.

Tray Blackmon got in on the action with an interception late in the fourth quarter, which allowed the Tigers to be set up inside the 10-yard line. Blackmon got rewarded for his great defensive play by getting the rushing touchdown that made it 50-15 with under a minute to go in the game.

Troup moved to 9-0 and will have a no. 1 seed in the playoffs meaning that they will host a playoff game at Callaway Stadium in two weeks time. In the meantime, the Tigers will have a date with crosstown rivals LaGrange next Friday.