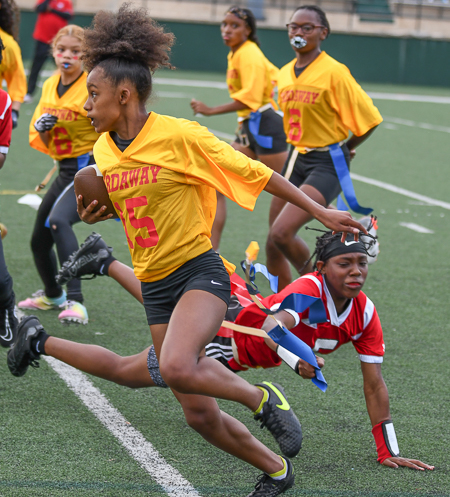 After a couple of narrow losses to Shaw and Harris County last week in which the offense stalled, Callaway got down to brass tax on Tuesday night as they toppled Hardaway and Troup as part of a doubleheader in Callaway Stadium.

The first game against the Hawks was an extremely tight affair. Hardaway scored on a long touchdown run with 10:10 left to go in the first half to take a 8-0 lead.

The offense could not get much going in the first half but came out storming to start the second half. Keiyunna Maddox caught a touchdown and two-point conversion from Mary Kate Baswell to tie the game with 14:04 left in the second half. A late 41-yard touchdown run by Maylashia Parham late in the game gave the Cavaliers their first lead. A Mya Lawton interception on the final play of the game iced a big win for the Cavaliers.

Game two saw the Callaway offense truly come to life. Baswell was slinging the ball over the field and opportunistic wide receivers were getting the ball and doing damage with it in their hands. Parham was outstanding in game two as she thought she started the scoring with a 41-yard touchdown run, but it was called by a guarding the flag penalty. A 30-yard touchdown reception from Madison Kemp a couple of plays later gave the Cavaliers a quick 7-0 lead.

Kemp showed her stuff on the defensive side of the ball as well by snagging an interception in the second half.

After a 51-yard touchdown connection between Baswell and Parham put the Cavaliers up 27-0 with seven minutes left in the game, Coach Eric Woods emptied the bench and got his reserves some valuable game time.

Maddox hit the Tigers with the finisher when she took an interception back for 35 yards and a touchdown with 4:22 left in the game.

Callaway moved to 3-2 on the season. The Cavaliers will play at Central on Thursday.