Athlete of the week: Jaylon Jordan takes the top off of defenses 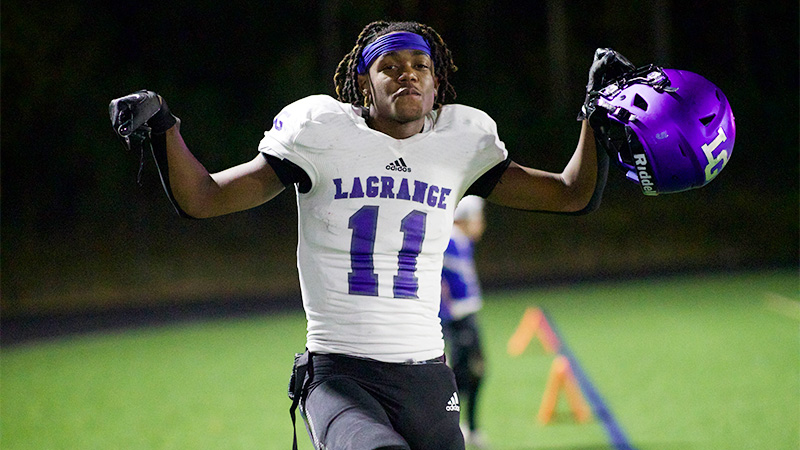 It is not often that a player reels in two 70-plus yard touchdown catches in a must-win game, but that is just what LaGrange senior Jaylon Jordan did against Trinity Christian.

“The first one was off a post and at first I didn’t know if I was going to get the ball, but then I beat my man and locked eyes with my quarterback, and he launched it,” Jordan said. “I boxed out the cornerback and went up and got it. The second one was a play we had just learned.”

It was a game full of high pressure. The Grangers answered the bell and came out with a 24-10 win in large part due to the dominant performance put on by Jordan.

“Before that game, we prepared like we never had before,” Jordan said. “We were all locked in. We had to know what color girdle they were wearing.”

Jordan brings his 6’5 frame to the football field and has been a big asset for the Grangers. He has slowly worked his way up the depth chart during his career at LaGrange and now forms a deadly 1-2 punch with fellow senior wide receiver Magic Johnson.

“If I was on defense, I wouldn’t know how to stop us,” Jordan said.

What makes Jordan so special is his ability to block and work even when he does not receive the ball.

“I’m not a selfish person, I want my teammates to eat too,” Jordan said. “Scoring is fun, but seeing my teammates well makes me happy.”

Jordan has also forged a special bond with fellow senior and starter quarterback Jaylan Brown. Brown has been Jordan’s quarterback since he moved to LaGrange from Newnan in middle school.

Jordan moved around positionally for the first phase of his football career. Now, he feels right at home at wide receiver after a tipping point his sophomore season at LaGrange High.

“I had three touchdowns in a game for JV my sophomore season, and that’s when I knew I belonged,” Jordan said.

As a senior, Jordan’s time as a LaGrange football player is winding down. Depending on how the game against Troup goes on Friday, this could be the final week of his Granger football career. He doesn’t want to take it for granted and rues that the game against Fayette County last Thursday was canceled.

Jordan has aspirations of playing football at the next level and wants to fill out his highlight reel and resume anyway he can.

With LaGrange not able to earn a home game in the first round of the playoffs, Friday will likely be his last game in Callaway Stadium.

“I want to be remembered for working hard and giving it my all every time I stepped on the field,” Jordan said.