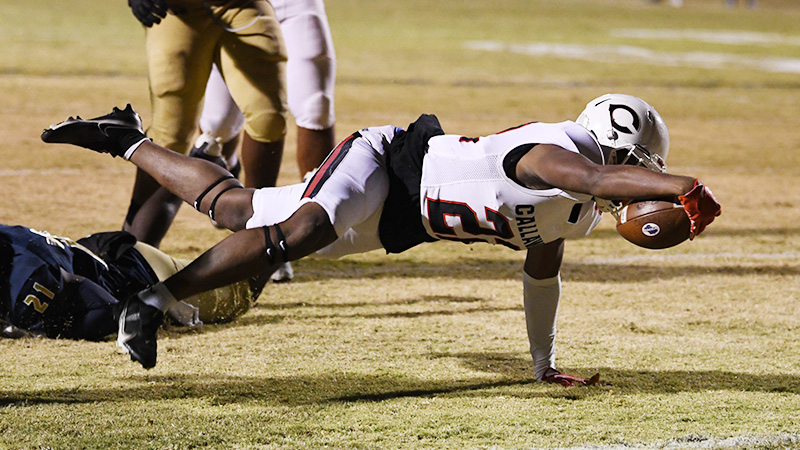 The regular season came and went for the Callaway Cavaliers as they cruised to a 27-14 win over Landmark Christian School. After dropping their first three games, the Cavaliers have rattled over seven wins in a row — all by at least two scores.

“Anytime you win it’s good,” Coach Pete Wiggins said. “This is the type of game that prepares us for down the road. We have to keep taking forward steps and getting better each day.”

“We don’t know the extent of their injuries right now,” Wiggins said.

Zia Hart, Tyren Buggs and Amarion Truitt stepped up in the absence of the star running backs.

“They provide us great depth,” Wiggins said. “I’m proud of those guys. They came in and got some valuable reps out there tonight and helped us move the ball and keep the momentum going.”

The game had a little bit of drama early before the Cavaliers took command in the second quarter. Whitfield scored to make it 6-0 late in the first quarter before Landmark came storming back to take a 7-6 lead on a 26-yard touchdown run by Micah Lewis.

With 21 seconds left in the first half, Truitt was able to plunge into the end zone on a short touchdown run. A two-point conversion on a scramble from DeShun Coleman gave the Cavaliers a 14-7 lead.

The Cavaliers defense took over in the second quarter. After a fake punt got the War Eagles in Cavalier territory, the defense made a big stand punctuated by a sack from Deontaeus Brooks on third down to force a punt.

A Dylan Stephens sack on third down with 1:32 left in the first half forced the War Eagles to punt out of their own end zone and gave the Cavaliers quality starting field position.

The good field position for the Cavaliers ended with Greyson Batchelor nailing a 23-yard field goal at the first half buzzer to give Callaway a 17-7 lead heading into the break.

The War Eagles came out of halftime trying to get cheeky with an onside kick, but Dylan Nation was quick to jump on the ball for the Cavaliers. Callaway drove the ball down the field and capitalized on good opening field position in the second half with a 34-yard field goal from Batchelor. After missing the first extra point of the game of the right upright, Batchelor settled in and showed why he could be an asset for the Cavaliers come playoff time.

“Sometimes you miss, and you have to get back on the horse and go again,” Wiggins said. “He made a couple of big field goals and the remaining PATs. It was a good job for Greyson and keeping his confidence high.”

The Cavaliers drained the clock with a 94-yard drive to start the fourth quarter, finished off by a two-yard touchdown run from Hart. The score gave the Cavaliers a 27-7 lead with 9:47 left to go in the game.

The War Eagles were able to get a garbage time score with under 40 seconds in the game to make the score a bit more flattering.

Callaway finished the regular season 7-3. Callaway will take on the loser of the Mt. Paran-Washington game next week at Callaway Stadium to kickoff the first round of the AA state playoffs.