Keeping the momentum rolling: Callaway heads to Landmark Christian on Thursday with a region title in tow 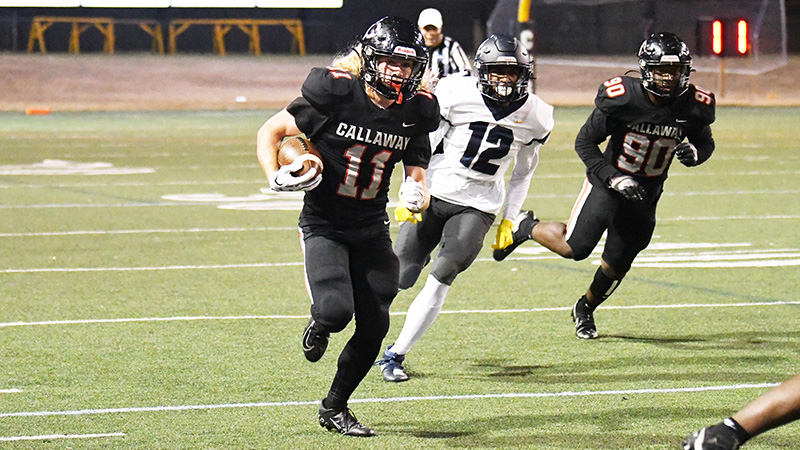 With its 10th region title in program history in tow, the Callaway Cavaliers are heading 45 minutes up I-85 for the final game of the regular season against Landmark Christian Academy.

“We take each game one week at a time,” coach Pete Wiggins said. “Our guys are really confident with where we are right now. We are looking forward to matching up with Landmark.”

The game was originally scheduled for Friday, but got moved up to Thursday. This is something the Cavaliers are familiar with despite not having a Thursday game all year up to this point.

The Cavaliers have a no.1 seed in the playoffs locked up and will host in the first round next Thursday. Having back-to-back Thursday games might just give the Cavaliers some rhythm that a Friday to Thursday turnaround might not.

“It will prepare us for the following week when we open the playoffs on Thursday,” Wiggins said. “All of that could be good stuff for us.”

Right now, it is all about keeping the momentum the Cavaliers have built up in recent weeks. After dropping their opening three games, Callaway has rattled off six straight wins — all by at least two scores including two wins over teams that formerly resided in the top 10 of AA until they played Callaway.

No player represents the roll the Cavaliers have been on quite like Qua Whitfield. The bruising running back has tallied 655 yards and 13 touchdowns over the last four games. It is not just Whitfield grinding out yards on the ground, it has been a group effort. The running game has had at least 250 yards in each of the last four games. Jordan King provides the 1-2 punch with Whitfield and the Cavaliers have been getting Zai Hart and Dylan Stephens getting more involved in the run games — Stephens usually gets his carries on wide receiver reverses.

The offensive line is opening up holes and the junior quarterback provides a dual-threat ability that makes defenses have to think twice about how they defend him.

It is not just the offense that has impressed in recent weeks, the defense has as well. Led by Fred Tigner, Elijah Gunn and Sam Williams up front and lockdown corner Karmelo Burton on the backend, the Cavaliers have been stingy as of late, allowing more than 12 points just once across the last six games when no. 9 ranked Eagle’s Landing put up 20 points, including a garbage time touchdown when the game was no longer in the balance.

While Callaway will come into the game wanting to keep momentum, Landmark Christian will have something a bit more to play for. The Eagles are 5-4 overall and 3-2 in region play. While Landmark Christian has locked a playoff spot, the Eagles can finish as high as third in the region if they beat Callaway on Friday and have Columbia lose against Towers. That seems unlikely as Towers does not have a win on the season.

Callaway is 6-3 heading into the final game of the regular season, the Cavaliers can move to 7-3 and ride a seven-game win streak into the playoffs with a win on Thursday. A loss could stall all the momentum that has been building in Hogansville, so the Cavaliers will not be taking Landmark lightly.