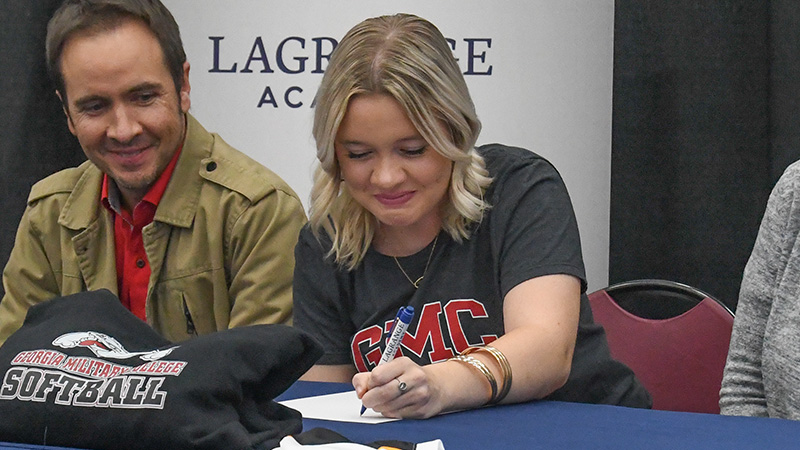 Wednesday was her day.

After a tumultuous fall in which the LaGrange Academy Warriors did not field a softball team, Carolyn Lehman officially signed on the dotted line to play softball at Georgia Military College starting in the fall of 2023.

“It was hard because I came here for softball, but really fell in love with the family atmosphere,” Lehman said. “I didn’t want to leave my family.”

It was one of the hardest decisions she has had to make in her young life. Knowing she would not be able to suit up for the Warriors again was heartbreaking, but she knew she could not walk away from everything she had built at LaGrange Academy — friendships, bonds, sisterhood, teammates, and above all, family.

“At first I was mad. I was ready to storm, I was so mad,” Lehman said. “I got over it because I give lessons so I have softball daily.”

The lessons she gives as well as the time she spends playing travel ball with Easton Gold has kept her sharp and ready to move up to the next level of competition very soon.

“I wouldn’t be the athlete and the softball player I am today without having played travel ball,” Lehman said. “It brought out a whole new level in my game.”

While she did not get the ending to her softball journey at LaGrange Academy that she wanted or deserved, there were still good times to be had when she suited up as a Warriors.

“I coached her for two years and in the first year we won a state championship,” athletic director Charles Parker said. “She hit well over .300. I know that for a fact.”

Lehman made all-region teams during her sophomore and junior seasons. She was the Warriors starting catcher and will have eyes on making the starting catching spot at GMC her own.

GMC made a natural fit for Lehman. She had already committed to the school before starting her senior season.

“I didn’t want to go to a four year school because I wanted to get into real estate,” Lehman said. “I love that [GMC’s] competition is very high, and their standards are very high.”

Wednesday evening served as a capstone and bittersweet send off to her softball career at LaGrange Academy. Family, friends and coaches surrounded Lehman and her big day and made her forget about the fact that she missed out on senior season as a Warrior and remember the good times along the way.

“It makes me feel loved and really cared about,” Lehman said. “I couldn’t be where I am without my friends and family. Not having a softball team meant I could make it to my friends’ games.”