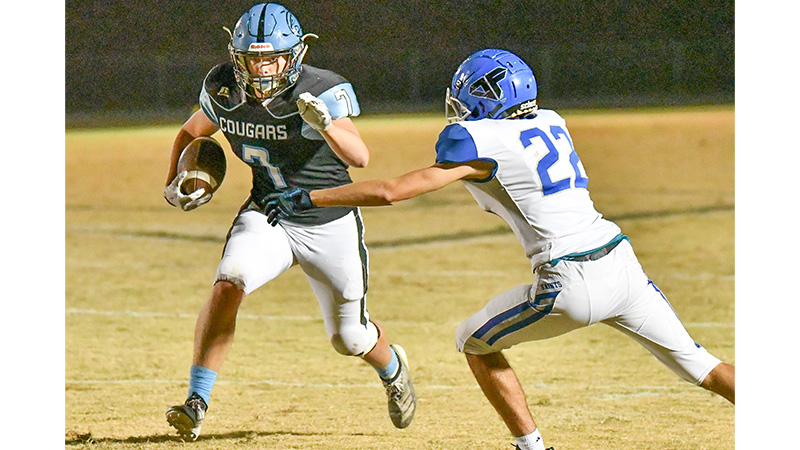 Lafayette Christian School is playing for a region championship game on its home turf this Friday when the Cougars host Unity.

“If we lose, we go into the playoffs as a two seed and if we win we get a first seed and have a bye next week,” coach Jared Pike said.

The Cougars will host a playoff game regardless, but a win on Friday night would send them straight into the semifinals of the state tournament.

The Cougars are fighting an uphill battle after losing last week to Sherwood in a game that saw the Cougars down quite a few of their regular starters. The flu bug has hit the team, but there is a light at the end of the tunnel.

“We have had so many guys out with the flu over here,” Pike said. “We had eight at practice on Monday and Tuesday we had about 12. We have 20 guys on the roster. A couple of starters were missing last week on both sides of the ball. I’m hoping everybody will be back on Thursday.”

The Cougars will need a full arsenal of players on Friday. Alex Tusing will be out like has the last few weeks, but Pike is hoping to get everybody back for a practice before Friday night’s colossal matchup.

Having this game on their home turf is a big boon for the Cougars.

“Everybody is getting hyped up and excited,” Pike said. “I’ve been telling the players that this is expected. I don’t expect anything less than us playing in this region championship game every year. I think we have the kids and the program to do it. I’m hoping this isn’t a one hit wonder, and we end up doing this every single year.”

Unity currently sits at first in the region and has one of the best players in the GAPPS AAA classification at quarterback.

“Their quarterback is the man,” Pike said. “He’s averaging right around 300 all-purpose yards a game. He’s running for about 200 and throwing for another 100. If we can contain him and keep him from running around, we should be alright.”

It is easier said than done, but the Cougars defense had been rounding into form until last week’s implosion against Sherwood. Lafayette Christian will need all men on deck on defense after letting up 63 points against Sherwood. The defense let up just 28 total points over the two games before Sherwood and was looking as if it had turned a corner.

One of the major reasons for the implosion last week was the severe lack of depth brought on by players missing the game due to the flu going around. One of the main reasons that Pike still has confidence in his defense is the emergence of Ephraim Snyder and Braden Firth on that side of the ball the last few weeks. When Tusing went down, the Cougars had a big void to fill on defense and he is not the only player missing on that side of the ball. Snyder and Firth each have recorded at leat one turnover in the last couple of weeks as they adjust to their new roles on defense.

Those two players combined with quarterback Andrew Hough will be the heartbeat of the offense on Friday. Snyder will see the lion’s share of carries out of the backfield and Firth will likely be the team’s no.1 receiver once again.

Lafayette Christian is heading into Friday’s game at 6-3 and will be looking for a bounce back win after last week’s disappointing effort against Sherwood.

“I told them to keep their heads on straight and don’t get overhyped,” Pike said. “We don’t want to play out of character because we are in a championship game. If we work hard and do what we are supposed to do, everything will work out alright.”