A tradition unlike any other: County rivals collide on Friday night 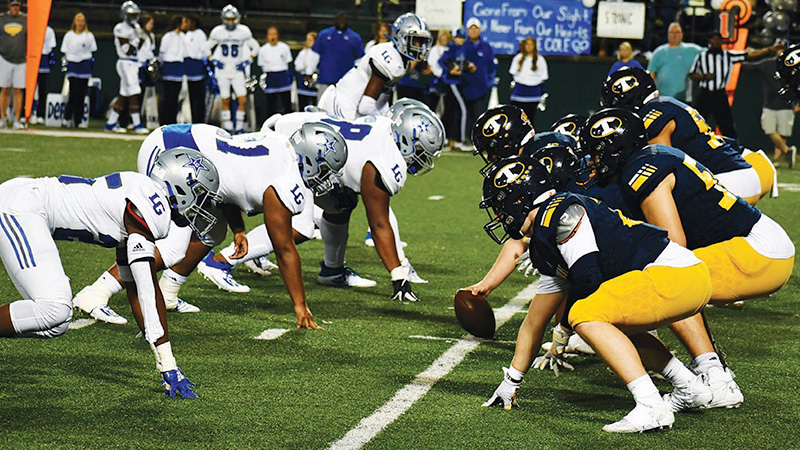 The last Friday night of the high school football regular season is always a special occasion in Troup County. With LaGrange and Troup set to due battle once again on Friday night, the rivalry continues to burn hot.

While one team comes into the game with a one seed locked up, the other has everything to play for. The Grangers know that their playoff destiny rides on Friday night. A win will see the Grangers head into the playoffs while a loss will all but eliminate them from playoff contention.

LaGrange comes into the game 7-2, but has only played eight games as last week’s game was forfeited by Fayette County due to a flu outbreak.

The Grangers made the playoffs in the first two seasons under Matt Napier and are looking to make it three in a row but face an extremely tough test on Friday.

Despite having not played since week four, Malachi Fannin-Render is still the Grangers leading rusher with 665 yards on the season as he has been difficult to replace. AJ Tucker has been the main man in the backfield since Fannin-Render’s injury. Tucker has 601 yards and seven touchdowns on the ground and is averaging over nine yards per carry. A big part of the Granger rushing attack is senior quarterback Jaylan Brown. Brown has over 200 yards rushing and nine rushing touchdowns as the dual-threat quarterback presents loads of problems to defenses.

The LaGrange passing game has been just explosive. Jaylon Jordan caught two passes for 161 yards and two touchdowns in the Grangers last game against Trinity Christian. He gives LaGrange a big body and physical presence on the outside. Jordan has 408 receiving yards and is averaging over 45 yards per catch.

He is the team’s second leading receiver as all-around athlete Magic Johnson has led the way for the Granger receiving core. He has 543 yards receiving and has 19 more receptions on the season than the next highest Granger.

Stringing the offense together is Brown. Brown has thrown for over 1,300 yards and 13 touchdowns while throwing just one interception on the season. His ability to keep the ball safe has been crucial to LaGrange’s offensive success in 2022.

Troup comes into the game with a supernova at quarterback. Possibly the best AAAA player in the state this year, Taeo Todd, has thrown for 1,498 yards and 16 touchdowns, but what makes him special is ability to do it on the ground and through the air. Todd has racked up 1,355 rushing yards and 19 touchdowns on the ground. He is where all eyes on the Grangers defense will naturally be glued to.

Todd has three big time wide receivers to throw to that complement his game so well. It was junior Logan Sinkfield who diced up Trinity Christian last time out in tune to four catches for 172 yards and two touchdowns. Qua Moss is the team’s leading receiver and while he only had two catches for 31 yards last week, is an extremely dangerous player especially with the ball in his hands — something Troup tries to do as often as they can including on special teams where he has a return touchdown on the season.

Malikih Poythress is the third member of the trio and caught one pass for 28 yards against the Lions but has had his fair share of impactful games as well this season. Tight ends Noah Dixon and Qua Birdsong give the Tigers a physical presence on offense.

Birdsong and Dixon are also the heartbeat of the defense and both junior four star recruits could see themselves accepting a big college offer sooner rather than later.

Troup is heading in to the game 9-0 and have never finished the regular season undefeated in program history. The Tigers will have a chance to make history with a win Friday.

LaGrange leads the all-time series 20-14, but Troup has won six in a row and are 6-1 against the Grangers since Tanner Glisson took over as the Tigers head coach in 2015.