WHAT A GAME: LaGrange scores twice in less than a minute, stuns Troup to clinch playoff spot 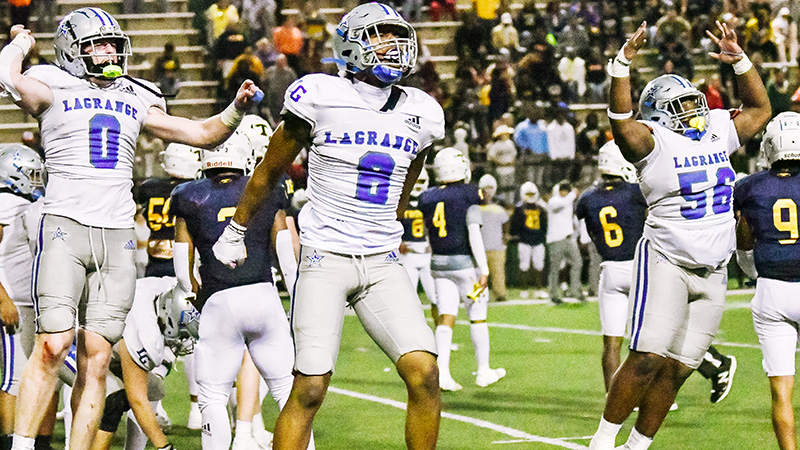 Friday night’s LaGrange-Troup game had everything. Critical turnovers, late-game heroics and a dash of insanity with a sprinkle of the impossible.

The Grangers came into the game in a must-win scenario to make the playoffs and showed every ounce of heart they had to knock off no. 4 Troup 38-34. LaGrange (8-2) scored two touchdowns in less than a minute to stun the Tigers, ending Troup’s (9-1) run at the first perfect regular season in school history.

“I think it’s important to remember how much these young men put into these games,” LaGrange coach Matt Napier said. “These young men don’t just show up on Friday and play a ballgame. They commit their life to Granger football.”

Troup had little to play for outside of bragging rights, but it was still not a satisfying ending to the 2022 regular season.

“I thought we were bad in all three phases,” Troup coach Tanner Glisson said. “What I was most disappointed in tonight was our effort. I felt like they wanted this game a lot more than us.”

While the game was full of momentum swings, one major defensive play changed the game entirely. With 2:41 left in the game, Parker Shattuck jumped a short screen pass from Troup quarterback Taeo Todd, picked the ball off and returned it inside the Tigers five-yard line.

“Coach Napier told me that he loves my commitment,” Shattuck said. “He loved that I didn’t want to come off the field. I played the whole game and played my heart out.”

It was a game where tons of players for LaGrange played with their hearts on their sleeve.

After Shattuck’s interception, AJ Tucker broke the goal line on a 13-yard touchdown run to give the Grangers a 38-34 lead after the PAT. Both players will now be forever etched in Granger lore.

“I’m so proud of Parker,” Napier said. “He’s got guts. We count every play that each player plays. Every week he’s playing 70+ a week and gives it his all on both sides of the ball.”

The game had more drama than a Shakespearean play as two heavyweight fighters threw haymakers on the biggest stage in the county.

LaGrange landed the first blow when the Grangers took just 1:14 off the clock to march 74 yards down the field to score. Tucker plunged into the end zone from 20 yards out to give the Grangers an early 7-0 lead.

The Tigers had an answer in the form of Todd, who made uo for a fumble on the Tigers initial possession of the game by scoring on short run play. That cut the lead to 7-6 Grangers.

With 6:09 left in the first half, Christian Ceja made a field goal from 26 yards out as he cannoned the ball through the uprights to give the Grangers a 10-6 lead.

Todd showed why he is the favorite to be named AAAA state player of the year when he pulled a rabbit out of his hat and stayed on his feet for a 35-yard touchdown run to give the Tigers their first lead of the game, but it was the Grangers who brought the magic. On the next drive, Magic Johnson took the top off the Tigers defense en tune to a 56-yard touchdown reception as Jaylan Brown dropped an absolute dime into his arms.

The Grangers thought they would take the lead into the break, but Troup answered with a 46-yard catch and run from Noah Dixon to give the Tigers a 20-17 lead heading into halftime.

The third quarter was quiet as neither team scored a point. Troup took the first 6:05 off of the third quarter but could not find the end zone as a turnover on downs gave the ball right back to LaGrange.

Less than a minute into the fourth quarter, Todd connected with Dixon on a 27-yard touchdown connection to give the Tigers their first double digit lead of the game.

The Grangers quickly answered with a Johnson 20-yard touchdown that cut the lead to three with a little over seven minutes to play.

The fourth quarter was one of superheroics, including Todd answering the bell with a long touchdown run to give the Tigers another double digit lead with 5:24 left in the game.

On the ensuing drive, Brown put the Grangers on his back and produced an iconic Granger play when he rumbled through three defenders for a 50+ yard score with a little over three minutes to play.

“He’s got guts and he made play after play,” Napier said. “Jaylan has done that all year for us. He’s a guy that we can rely on. We have been through some battles together. To see him come through and make a special play like that was amazing for our team.”

Two plays later, Shattuck intercepted the ball and set up the Grangers in enemy territory.

“It was a screen play, and we probably should have thrown the ball away instead of forcing that,” Glisson said. “If we could do it all over again, there are a lot of things we’d do over in all three phases. I don’t really look at just one particular play.”

Troup mounted a late drive that ended inside the Granger 30-yard line as a Todd pass was completed short of the sticks on fourth down.

Jubilation took over the LaGrange sideline. The Grangers booked a spot in the playoffs with the victory.

LaGrange finished the regular season 8-2 overall and 5-2 in region play. The Grangers will take on Burke County next week in the opening round of the playoffs at Callaway Stadium. After a lot of ups and downs this season, the Grangers will be entering the AAAA playoffs as a two seed.

“It feels great, I want a couple more of those (water cooler baths),” Napier said with a laugh. “I want the expectation to be that we don’t drop a water bath for that game, we do it for a region championship.”

Troup finishes the regular season 9-1 overall and 6-1 in region play. The Tigers claimed their first region title in 35 years and will be able to wash the taste of defeat out of their mouth with a playoff game next Friday against New Hampstead at Callaway Stadium.

“We have to make sure this game doesn’t beat us twice,” Glisson said. “The good thing about it is, we have a chance to go do something right next week.”