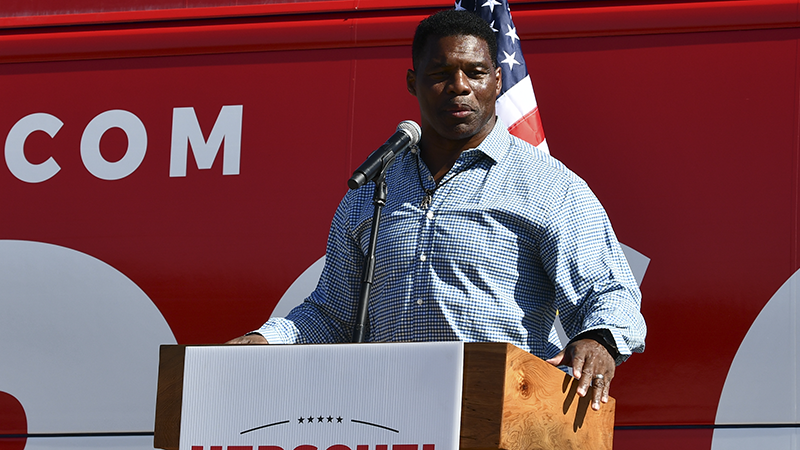 With only a few days remaining until the Nov. 8 election, U.S. Senate candidate Herschel Walker stopped in LaGrange for a campaign rally Friday afternoon.

Walker’s Unite Georgia Bus stopped by Kimbles Food by Design to speak to a large crowd of supporters and one of the last opportunities to speak to voters before the election. The candidate was joined by former Congresswoman Tulsi Gabbard of Hawaii and former Florida Attorney General Pam Bondi.

Walker wasted no time before going after his opponent, Senator Raphael Warnock and President Joe Biden.

Walker spoke on many topics, including the economy, the border, transgender people in sports and pronouns.

“Y’all see where we’re at right now? In two short years, you’ve got this economy that’s gone just to the crapper. We got this border that’s wide open. You’ve got men in women’s sports,” Walker said.

“They’re bringing pronouns into our military. My pronouns are sick and tired of it and I will tell you right now, Senator Warnock’s pronoun is going to be former senator.”

“They’re trying to go after our kids right now,” Walker said. “All of a sudden, we have a president that calls us domestic terrorists because we want to protect our kids from them telling a white kid because you’re white, you’re an oppressor. And because you’re black, you’re a victim.”

Walker said plenty of people along the campaign trail have asked him why he is running,

“Why am I running? Because I’m sick and tired of weak leaders in Washington. I remember my father told me no he meant no. And when I got too big for my britches he said ‘Boy, if you don’t like the rules under my roof, you can leave my house.’” Walker said. “So, it may be time for these leaders in Washington to say if you don’t like the rules of the United States of America, you can leave. We don’t need you.”

Walker also pushed back on Warnock’s claims that he has lied during the campaign.

“He said Herschel’s lying. I’m not lying. He’s lying because he told you he was going to Washington to represent Georgia, and he did he not,” Walker said, “Where did he go? To Washington to do to represent Joe Biden 96 percent of the time … All he did is raise our taxes and spend our money.”